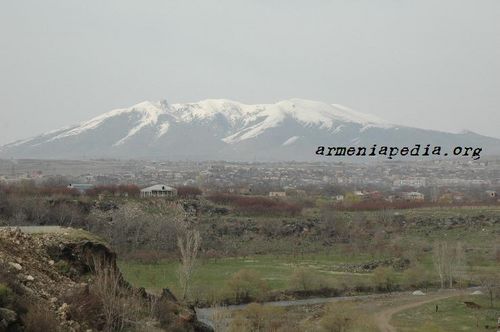 Mt. Ara with Ashtarak in foreground.

From entrance ramp to the Red Cross Hospital on the Ashtarak Highway, pass the villages of Kasakh (4278 p), near the Defense Ministry, and Proshyan (4364 p). At 10.5 km take right off-ramp (signposted “Egvard”). At 12.3 km turn left (no sign) on asphalt road. At 13.9 km turn left (signposted “Nor Yerznka”), asphalt. Nor Yerznka (1470 p), founded in 1949. Go uphill through village (mudholes). At 17.4 km keep straight at fork in road. At 17.7 km bear right at 3-way fork (asphalt). At 18.4 km continue past the factory (on right), orchards. At 24.2 km turn right at T (by pump station -- going left takes you through a Yedidi hamlet to an impassible track up the back side of the mountain). At 24.4 km turn left over canal onto rocky jeep track (going straight leads eventually to Yeghvard).

Ascend along a gully approximately 1.5 km, or a 30-minute uphill walk into the heavily eroded and mysterious volcanic crater of Mt. Ara* (Arayi Ler), named after the handsome early Armenian god/hero/king killed and brought back to life under mythological circumstances involving Queen Semiramis. Built into a mossy cave, complete with sacred spring, is the shrine of Kuys Varvara (the Virgin Barbara), also known as Tsaghkevank, with saint’s tomb, altar, ferns, and candle vendors. The Vatican has decided that St. Barbara, like St. Christopher, is probably mythical, but if she did exist she was martyred by her cruel father for espousing Christianity, or alternatively snatched away by angels. Local holy person will say prayers and help you nick the comb or ear of rooster or sheep before you sacrifice it down below in gratitude for/anticipation of the saint’s healing intercession. Picnic tables available.

In the gorge leading into the crater are house and fortification walls. Further up the crater to the right of the shrine is another small cave with a cross and some pictures of the saint. To the left of the shrine, along a narrow path, are faint traces of a medieval building. There is at least one bear roaming the mountain, and two snakes; also, other caves, rock formations, and a strenuous but scenic hike around the crater rim (ca. 3 hours; the trail up, like St. Barbara herself, existentially challenged).