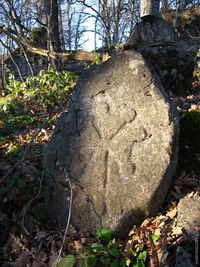 Mesis (or Masis) Vank in the Martakert region of Karabakh: the local inhabitants call the complex Mesis Vank. Around it are noticeable traces of serf-walls and a cemetery. Near the monastery was situated a settlement of the same name. Here has preserved the millstone of the oil-mill, the dwelling foundations are noticeable.

The monument is situated towards north from Haterk, above Ulupap, on a woody spur of Mrov. The complex, judging by the ruins consisted from a church and a vestibule. The church is a basilica (5,3 x 3,2m), and occupies a not large area. The vestibule is a square in scheme large (6,5 x 6,4m) construction. The church from north is connected with a vestry, in the western part of which is placed the door to the vestibule. The exact foundation date of the monastery because of the absence or fragmentary inscriptions is yet unknown. Only separate details point to XIIc. The monastery was surrounded with a serf-wall. In the beginning of our century the complex was partly repaired by brothers Bala, Aghabek, Musael and Nerses from Vardunts family.