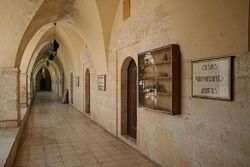 The Edward and Helen Mardigian Museum of Armenian Art and History

The Edward and Helen Mardigian Museum of Armenian Art and Culture is located inside the Armenian Convent walls in the Old City of Jerusalem. The Museum offers a comprehensive overview of 3,000 years of Armenian art, culture and history. The building is actually situated in the former “Chamtagh” which once served as the Patriarchate’s Theological Seminary (1843). Like its twin, Paghchatagh, this building too had to be converted into residential quarters for displaced Armenian refugees. After all the refuges had emigrated and found new homes in America, Canada and a host of other countries, the Chamtagh fell into disrepair. Some 20 years ago, the Armenian philanthropist couple, Edward and Helen Mardigian, came to the rescue. Thanks to their generosity, the Chamtagh was soon transformed into a museum and has become one of the Armenian Diaspora’s most important and valuable cultural outposts.

Following its inauguration, the building had undergone extensive refurbishing at the hands of an expert seconded to the Patriarchate by UNESCO (the United Nations Educational, Scientific and Cultural Organization). The 200 year old building houses incomparable historical and religious artifacts some of which were brought to Jerusalem by a regular stream of pilgrims. Included among the museums’ unique displays are precious hand woven rugs, a collection of Armenian coins and even some banknotes issued by the short-lived pre-Bolshevik Armenian Republic, scraps of evidence of the presence here of the Xth Legion, huge copper cauldrons crafted by Armenian smiths more then half a century ago, colorful tiles from the world-famous Kutayha district, an ancient map of the world printed in Armenian, and a replica of Gutenberg’s original printing press. This press is believed to be the first ever used in Jerusalem.

There is extensive coverage of the Armenian Genocide of 1915 and its aftermath. A whole section is devoted to a survey of the 1600 year history of the Armenians in the Holy Land.

Tours are available by calling, preferable a day before.