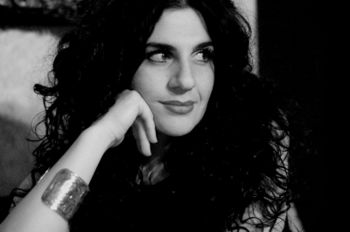 Lory Tatoulian is a Goodwill Ambassador of the United Nations, Chapter President of Mensa, Member of Blockbuster Video, card-carrying member of VONS and provides the cookies for her Neighborhood Watch meetings. When she’s not at a meeting, she cruises the streets of Glendale and hangs out at the romantic Americana (which she considers the 8th wonder of the world.) She hopes to get out of Glendale someday to see what life is like west of the Interstate 5. In the meantime, Lory has created, written and produced three Big Bad Armo shows: The Big Armo Show, Big Bad Armo X-Mas and Big Bad Armo: World Domination. She has also written and performed in solo shows which include Sitting Twisted, Talking Straight (Off-Broadway), Autosapiens,and Pomegranate Whisky. She works as a journalist and teaches theater to children. In the Spring of 2009 she was awarded a grant from the National Endowment for the Arts for her work in the theater.

Tatoulian is an actress and playwright whose work explores issues of cultural identity, gender and ethnic community dynamics. Her comedic character-studies define the core of her style. Tatoulian's explorations take root in theatrical monologues that meld the comedic and absurd experiences of several ethnic groups, including Armenians, who make-up the American tableau. Her intelligible character portraits range from an Avon Lady who wants to help democratize the world, to a housewife jazz singer from Beirut, to a car addict who contemplates her free-will on the freeway in the award-winning piece "Autosapiens," a comedic realization of Californians' intricate relationship with their automobiles. The San Diego Union Tribune writes, "The boldly physical writer-performer Lory Tatoulian sent up SoCal's car mania in her explosive satiric solo. Tatoulian is a find. In 'Autosapiens,' she creates a freeway-crazed gal who's decided to spend her life in her car. As she eats, observes, makes love and fights other drivers on the highway of life, she devolves into another species altogether, the Autosapien."

SKETCHED is a collection of humorous stories and musical vignettes.

Throughout the evening, Tatoulian manages to incarnate into 10 different characters from across the globe. She collaborates with talented musician and composer Ara Dabandjian. Together they bring jazz to Armenian children's songs, rhythm to the stylings of Glendale and sheer satire to the peculiar inhabitants of all those who live on the periphery of society.

SKETCHED will be ran on the first four Saturdays in October at 8 p.m. The exact dates are October 1,8,15,22.