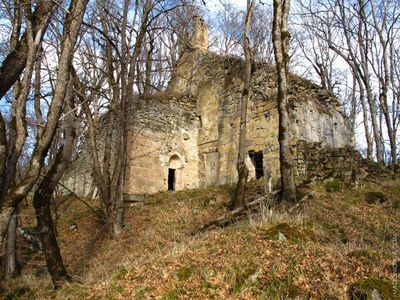 People call it simple Anapat (desert). It is situated in a distance of 8km from Kolatak settlement in a forest on a hill called Anapat. The complex consists of three churches, surrounded with stony fence. Inside the fence has preserved a water-reservoir, here are clearly seen traces of water-supply system. A great historical, ethnographic and artistic value present complex' khachkars, the various reliefs and epigraphic inscriptions. 25 inscriptions of XII- XIIIcc have been published. This large historical complex in historical literature is mentioned by Khoshik Anapat name. The monastery's inscriptions are dated 1179, 1181, 1186, 1191, 1194 and coming ages.

The monastic complex with its spacey yard divided into two parts. The monuments of the northern group present three churches and one common for all of them three-arch vestibule-chapel.To the northern wall of the vestibule joins a rectangular half-destroyed building, most likely an ancient dining-hall. A little towards north-west are seen ruins of monastic cells and economic constructions. Among them are scattered several wholly-preserved khachkars with relief pictures of riders.

The vault of the largest, southern church has collapsed, the other parts have preserved quite well. The walls are built from roughly-trimmed stone. Trimmed stone was only used for alter-rising, on which is carved a 12-line inscription dated 1265.

The constructions of yard's southern wing consist from two buildings, connected with each other by two door-passages.

The bathing-house is an interesting construction, from which have preserved half-destroyed walls, with put in them tens of clay-pipes. Separate ornamental motives, mainly reliefs of grape-bunches on some khachkars and gravestones point that Anapat monastery was founded before XIIc. Towards east from the dessert is situated the cemetery, occupying a large territory.

Far from Kachaghakaberd, in the blue fog traces another beautiful sight- in the general picture of the high rocks is hardly noticed Tartar's valley, famous for its secular oldness.