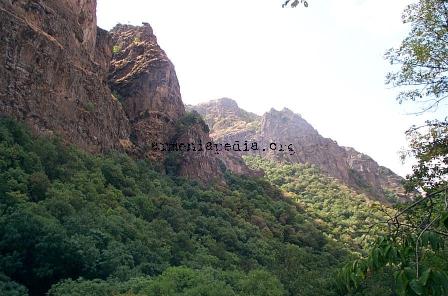 Khosrov Forest State Preserve (Խոսրովի անտառ պետական արգելոց) is located south of Garni Temple and east of the Ararat Valley in Ararat Marz. Named after King Khosrov, who planted the forests so he could hunt in them, the preserve contains intersting sites besides the forests, hills and rivers. There is Aghjots Vank Monastery (aka Surp Stepanos), Kakavaberd Fortress, the Azat Caves, with remains of ancient settlements, and Havuts Tar Monastery on the edge of the forest - visible from Garni Temple. 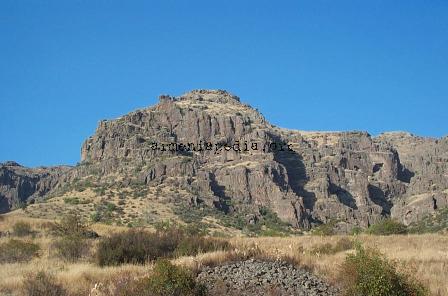 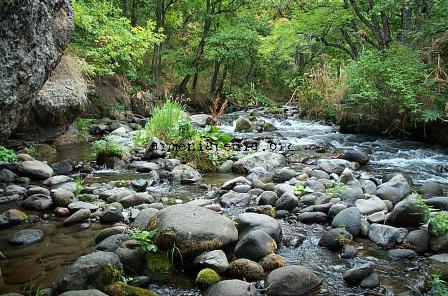 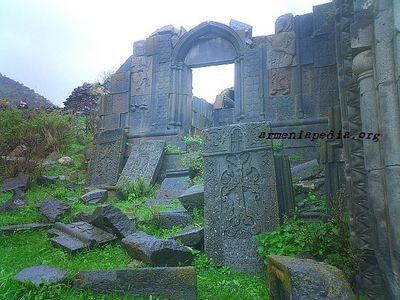 Khosrov Forest State Reserve is one of the oldest protected areas in the world.

The roots of Khosrov Forest State Reserve are buried deep in history and reach to the 4th century AD, The Arsacid dynasty (known natively as the Arshakuni dynasty) in the times of Khosrov the 3rd Arshakuni. Historic sources say that "Khosrov Forest" expression is associated with the King Khosrov III Kotak (Kotak means small).

Khosrov Forest State Reserve was established in 1958 by the ArmSSR Council of Ministers decision N P-341. The reserve is located in Ararat Province of Armenia in the neighborhood of Ararat valley, on the mountainous ridges Gegham, Yeranos and Yerakh. It occupies a territory of 23213.5 ha at the altitudes from 700 to 2800 m above sea level. The reserve protects juniper and oak forests from Tertiary Period, arid associations of semi-desert and phrygana landscapes and other Mediterranean relict plant ecosystems as well as the genetic fund of rare animals and plants adapted to the reserve conditions. Since 2002, administrative, scientific, practical and organizational activities in the reserve have been implemented by the “Khosrov Forest” State Reserve” State Non-Commercial Organization (SNCO) of the Bioresources Management Agency under the aegis of the Ministry of Nature Protection of the Republic of Armenia.

According to the reserve charter (RA Governmental decision N 925 from 30.05.2002, Annex 1) the main goals of the reserve establishment are to ensure natural development of water and terrestrial ecosystems of the Revers Azat and Vedi basins, to protect the landscapes and biological diversity including the genetic fund of rare and endangered plants and animals as well as their habitats, to implement scientific research and to create prerequisites for the development of scientific-educational tourism, environmental education and responsibility.

The following protected areas are under the subordination of the “Khosrov Forest” State Reserve” SNCO:

Realizing the importance of the reserve, on August 26 in 2013 “Khosrov Forest” State Reserve” SNCO was awarded with European Diploma of Protected Areas.

The reserve has wonderful landscapes, rich biological diversity, a huge variety of interesting and important untouched forests that are the result of long-term preservation, proper management plan and structure.

On the territory of the reserve, making only 1% of the whole territory of Armenia there are 1,849 species of high vascular plants, which makes more than the half of the flora of Armenia (more than 3,800 species total) and about 1/3 of the wealth of the Caucasus flora (about 6,000 species total). They are represented in 588 genera and consist of 107 families. More than 80 species are involved in the Red Data Book of Armenia, and 24 species are endemic.

On the foothill and low mountainous zones at the altitudes from 800 till 1200-1300 and sometimes up to 1400 m the wormwood semi-deserts are common. Mountain(ous) steppes, arid sparse forests and oak forests are represented in the middle mountain zone (1400-2200 m above sea level).

Tertiary relict juniper and oak forests are located in the forest zone, which are rather dense in Khosrov and Khachadzor districts of the reserve. Meadow vegetation covers the altitudes from 2100-2200 up to 2600-2800 m.

Bezoar goat (Capra aegagrus) has been inhabiting the reserve all through the ages. Numerous rock paintings on the territory of the reserve and bezoar goat ornaments of monuments from the Middle Ages are the evidence of its long lasting existence on the territory. Bezoar goat got its name thanks to globular hard formations-bezoars, which are formed in its stomach on the basis of something hard in its food, for example, hair.

The invertebrates of the reserve are represented by more than 1.500 species, out of which 62 species are molluscs, 3 species are scorpions and 1.427 are insects species.

There is a free museum in the administrative building of the reserve in the town of Vedi, where one can get familiar with flora and fauna of the reserve.

The reserve has two visitors’ centers, one of which is located in Garni, and the other one in Khosrov district."Khosrov Forest" State Reserve is unique not only in Armenia, but also in the whole Caucasus ecoregion.