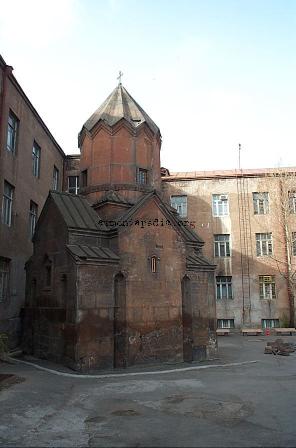 The oldest surviving church in Yerevan, the Katoghike, stands nestled in a courtyard on the W side of Abovyan Street just above Sayat Nova Avenue. Its current form dates to 1936 , when the old cathedral church of Yerevan, a substantial but undistinguished basilica rebuilt in 1693/4, was slated for destruction in the name of urban renewal. The archaeologists won a modest concession from Stalin's architects, that they could oversee the dismantling and record the inscriptions and architectural fragments incorporated in the rubble walls. Lo and behold, as the walls came down it became clear that the central apse, the sanctuary, was in fact an almost intact small Astvatsatsin church with inscriptions from the 13th century. Public and scientific outcry won the newly discovered church a reprieve, and since independence it has resumed its religious function, albeit invisibly from the main streets. In front of the church is a small collection of khachkar and other sculpted fragments from the core of the destroyed basilica.

The church is now very active. The building seen in this picture surrounding the church is now being torn down and an expansion plan is underway to finally reincorporate Katoghike into life at the center of Yerevan.