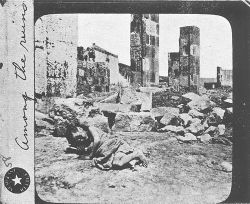 Ethnic Armenian town in ruins during the Armenian Genocide

Jakob Künzler (March 8 1871 – January 15 1949) was a Swiss of German origin who resided in an oriental mission in Urfa and who witnessed the Armenian Genocide.[1][2]

Born in Hundwil, Switzerland, he worked in the canton Appenzell and made a living as a carpenter. Afterwards he was trained in Basel as an evangelist deacon (Krankenpfleger). In 1899 he traveled to Urfa in Turkey, where he found his own place to work. He continued to study medicine until he became an independent operating surgeon, and later in 1905 he married Elizabeth Bende, daughter of a Christian missionary and granddaughter of an Ethiopian princess.

From 1915 to 1917 Künzler became a eyewitness to the Armenian Genocide[3], the subject of his 1921 book In the Land of Blood and Tears. Despite mortal danger he helped provide, when he could, for thousands of Armenian orphans and resumed his hospital enterprise in Urfa.

He was a Swiss pharmacist who had remained in Turkey serving the sick and wounded, non-Muslims and Muslims alike, in a hospital in Urfa who documented accounts of massacres of various Armenian labor battalion companies.[4]

In October 1922 he closed his hospital he worked in and moved his family to Ghazir, near Beirut, where later he opened a center for orphans. Later he established a settlement for Armenian widows in Beirut and a lung sanatorium in Azounieh.

He died in Ghazir, Lebanon.