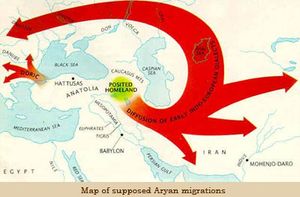 In the 2,000 years before the Indo-Europeans who remained in the homeland began to write history, the success of the agricultural revolution brought a population explosion to the Indo-European community. The pressure of population, we may surmise, compelled the migration of successive waves of Indo-Europeans to fertile areas that were not yet cultivated.

The linguistic translocation of the Indo-European homeland from northern Europe to Asia Minor requires drastic revisions in theories about the migratory paths along which the Indo-European languages must have spread across Eurasia. Thus, the hypothetical Aryans who were said to have borne the so-called Aryan, or Indo-Iranian, language from Europe to India—and who were conscripted into service as the Nordic supermen of Nazi mythology—turn out to be the real Indo-Iranians who made the more plausible migration from Asia Minor around the northern slopes of the Himalaya Mountains and down through modern Afghanistan to settle in India. Europe is seen, therefore, as the destination, rather than the source, of Indo-European migration.

Speakers of the Hittite, Luwian and other Anatolian languages made relatively small migrations within the homeland, and their languages died there with them. The more extensive migrations of speakers of the Greek-Armenian-Indo-Iranian dialects began with the breakup of the main Indo-European language community in the third millennium B.C. Two groups of Indo-Iranian speakers made their way East during the second millennium B.C. One of them, speakers of the Kafiri languages, survives to this day in Nuristan, on the southern slopes of the Hindu Kush in northeast Afghanistan. In Five Continents, a posthumous book recounting his many botanical expeditions between 1916 and 1933, Vavilov speculated that the Kafirs might perpetuate some "original relics" of Indo-Iranian.

The second group of Indo-Iranians, who followed a more southerly path into the Indus Valley, spoke a dialect from which the historical languages of India are descended. Their earliest literary ancestor is embodied in the Rig Veda hymns, written in an ancient variant of Sanskrit. The indigenous peoples of the Indus Valley, known from the archaeological discoveries at their capital Mohenjo-Daro, were apparently displaced by the Indo-Iranians.

After the separation of the Indo-Iranians and their departure for the east, the Greek-Armenian community remained for a time in the homeland. There, judging by the numbers of loan words, they had contact with speakers of Kartvelian, Tocharian and the ancient Indo-European languages that later evolved into the historical European languages. One such borrowing from the Kartvelian became the Homeric koas, "fleece."

A bilingual cuneiform tablet found in the Hattusas archives records the mythological tale of a hunter in the then already dead Hurrian language along with a translation into Hittite. This remarkable discovery gave us the Hurrian word ashi from which Homer's askos, for "hide" or "fur," apparently stemmed. Before their migration to the Aegean, the Greeks borrowed the Hittite word kursa, which by a familiar phonological shift became bursa, another synonym for "fleece."

These words seem to confirm the Greeks' belief that their ancestors had come from western Asia, as recounted in the myth of Jason and the Argonauts, who sought the Golden Fleece in Colchis, on the eastern shore of the Black Sea. The evidence that the Greeks came thence to their historical homeland puts the Greek "colonies" on the northern shore of the Black Sea in a new light. The colonies may now be considered as very early settlements that were established when the Greeks began migrating to their final home in the Aegean

The historical European languages—those that left literary remains— provide evidence that the dialects from which they descended had found their way into central Asia along with the Tocharians. These languages have many words in common. An example is the word for "salmon," once regarded as a weighty argument for a homeland in northern Europe. Salmon abounded in the Baltic rivers of Europe, and the word lax (German Lachs) in the Germanic languages is perhaps echoed by lak- in Hindu, for a lacquer of a pink color that evokes the color of salmon flesh. One species of salmon, Salmo trutta, is found in the streams of the Caucasus, and the lak-s- root denotes "fish" in earlier and later forms of Tocharian as well as in the ancient European languages.

The migration of the speakers of some of the early Indo-European dialects into central Asia is established by loan words from the Ugric language family, which gave rise to modern Finnish and Hungarian. Under the influence of Finno -Ugric, Tocharian underwent a complete transformation of its system of consonants.

Words in the ancient European languages that are clearly borrowed from the Altaic and other languages of central Asia give further testimony to the sojourn of their speakers there.

Circling back to the west, the ancient Europeans settled for a time north of the Black Sea in a loosely federated community. Thus, it is not entirely wrong to think of this region as a second homeland for these peoples.

From the end of the third through the First millennium B.C., speakers of ancient European languages spread gradually into Europe. Their coming is demonstrated archaeologically by the arrival of the semi nomadic "pit grave" culture, which buried its dead in shafts, or barrows.