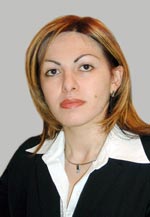 Hripsimeh Avetisyan was born on June 17, 1973 in Yerevan.

Ms. Avetisyan received her degree in economics and finances from the Yerevan Institute of National Economy in 1995.

From 1995-1997 she worked in the accounting division of the Haykhnaybank (Armenian Savings Bank) administration. In 1997 she assumed the position of account­ant in the Haykourort council. From 1997-2003 she worked as a chief accountant in the Arsoil CJSC. Since 1999 she has been a full member of the Armenia Accountants' Association. Since 2001 she has been taking her post-graduate studies at the Yerevan Scientific Research Institute of Management.

On May 25, 2003 she was elected as a deputy to the NA from the proportional list of the United Labor Party and she sits on the NA Standing Committee on State and Legal Affairs and is also the secretary of the United Labor Party Faction. She is a mem­ber of the NA Ad Hoc Committee on Determining the Effectiveness of the Use of Loans, Credits, Grants and Humanitarian Aid Received from Foreign Governments and International Organizations.

Ms. Avetisyan is not married.