From armeniapedia.org
(Redirected from Hovhaness Aivazovski)
Jump to: navigation, search

Born in the town of Feodosiya, Crimea, he spent his childhood in poverty. His talent as an artist earned him sponsorship and entry to the Simpheropol gymnasium and later the St. Petersburg Academy of Arts, where he graduated with the gold medal. In 1838 he was sent to the Crimea for two years for independent study where he painted the beautiful works Seashore and Moon over Gurzuf. In 1840 he went abroad, returning only in 1844. He was accorded the title of academician and tasked with painting all the major Russian military ports on the Baltic Sea. In the 1840s during his stay in Italy Aivazovsky's painting gained its own individual style, and by 1850 his art was fully mature.

In later life, his paintings of naval scenes earned him a longstanding commission from the Russian Navy. He was also commissioned by the Ottoman Sultan to paint various artworks which are still hang in Turkish museums. His work also hangs in the most renowned museums throughout the world, including New York's Metropolitan Museum and the Hermitage in St. Petersburg. 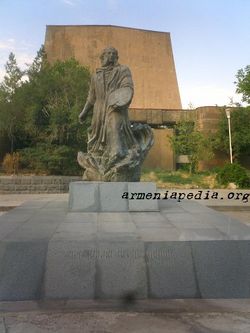 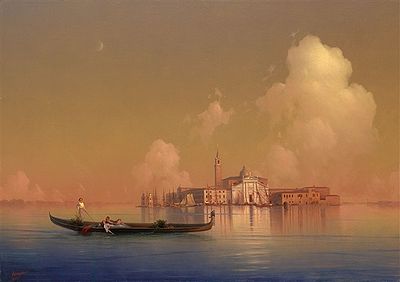 With funds earned during his successful career as an artist he opened an art school and gallery in his home town of Feodosiya. Aivazovsky himself was accomplished in many areas, played the violin, was an architect, and dabbled in archeology.

Aivazovsky also spent some time working in the Caucasus, sailing to the shores of Asia, visiting Egypt during the opening of the Suez Canal and near the end of his life, in 1892, Aivazovsky even traveled to America, where he visited Washington, DC, and Niagara Falls. He produced paintings as a result of all his travels, including a famous painting of Niagara Falls that hangs in his Teodosia galley.

Due to his long life in art, Aivazovsky became the most prolific Russian painter of his day and he left over 6000 works at his death in 1900. He is reputed to be a favorite among forgers.

Recently, nouveau riche Russians and Armenians (particularly Russian Armenians) have began to buy back many Russian paintings that ended up in the West after the 1917 Communist revolution, including works by Aivazovsky. In London's 2004 fall auction season several Aivazovsky works rated among the 10 highest sales of the week at both Sotheby's and Christie's. One of them "St Isaac on a frosty day" fetched a record 1.1 million pounds (2.1 million dollars or 1.6 million euros).

On May 1, 2003, a 3.5 m tall bronze statue of Ayvazovsky was unveiled near the Yerevan chamber music hall in the Armenian capital. Created by the sculptor Yuri Petrosyan, the maquette was originally the winner of a competition that took place in 1987 to create a public work, but the commission was sidelined when there was not enough money to complete the work. The 2003 monument was funded through the patronage of the President of Armenia's "Prometheus" Company, Senik Gevorgian.

Aivazovsky at 200: Turkey’s Love Affair with a Russian-Armenian Painter

BY SCOTT ABRAMSON Special to Asbarez

In late-nineteenth-century Russia, a speechless beholder of something very beautiful always had recourse to a popular cliche when a description was needed but inspiration failed. A sight “worthy of Aivazovsky’s brush” were the words with which the observer awed into silence could recover the faculty of speech. The hand that wielded this brush of such creative aesthetic power that it became the subject of cliche belonged to the Russian-Armenian Romantic painter Ivan Aivazovsky (1817-1900), the bicentennial of whose birth is on Saturday.

Aivazovsky’s celebrity in Russia has diminished little since his artistry was a synonym for breathtaking beauty. This is natural enough, inasmuch as the excellence of his work—like that of any masterful artist, writer, poet, or musician—is unaffected by the advance of time or the whim of fashion. As is also the case with other creative virtuosos, Aivazovsky’s genius has become the stuff of lore. One well-known legend tells of visitors to one of his exhibitions who, incredulous at his mastery of light, suspected trickery and accused the artist of hiding lanterns behind his canvases to illuminate the scenes.

If the longevity of Russian appreciation of Aivazovsky is nothing to puzzle over, then the celebration of this Russian-Armenian painter in Turkey, of all places, is another story. This is not just because in the person of Aivazovsky there combine the two peoples with whom Turkey’s relations have been—shall we say by way of understatement—troubled. Aivazovsky was indeed a patriotic Russian and a proud Armenian, but a circumstance more touchy from Turkey’s perspective was that he was also the “painter-in-chief” of the Russian Navy and, thus, the servant—and even a personal acquaintance—of four tsars, one of whom (Alexander II) was responsible for shrinking the sultan’s dominion considerably. But this is not all that would fail to endear him to Turkey. He was guilty of other acts of lèse majesté against the sultan, having both supported Greek self-determination devotedly and decried Ottoman aggression against Armenians in the last years of his life, amid the Hamidian prelude to the Genocide.

Even so, Aivazovsky’s labors in the service of the Ottomans’ Russian arch-enemy did not dissuade three sultans from commissioning him for royal portraiture or from decorating him with medals. At least one of these medals, it should be noted, he renounced in protest at the cruelties Abdul Hamid inflicted on the Armenians in the 1890s. Yet neither this nor his depictions of Ottoman brutality in some of the paintings he executed latterly—The Armenian Massacres at Trebizond, for example—has denied him the vast audience his works would find in Turkey. On the contrary, there, in one of the world’s most nationalistic countries, where offenses against national pride are prosecuted under the penal code’s notorious Article 301, many claim Aivazovsky as one of their own, as a sort of honorary Turk.

If an explanation for the apparent improbability of Turkish appreciation of Aivazovsky had to be reduced to a single word, it would certainly be “Istanbul.” Aivazovsky positively adored the Ottoman capital, which he journeyed to perhaps as many as eight times—and that in an era in which the cost, danger, duration, and general hardship of long-distance travel were far greater than they are today. Aivazovsky in fact painted Istanbul much more than he visited it, producing some 200 landscapes and genre scenes of the city.

It is the splendor of these depictions of Istanbul and the prolificacy with which he painted them—indeed, more than any of his Turkish contemporaries—that have won Aivazovsky the esteem of the Turkish public. In the past few years alone, this esteem has found rich expression in Turkey in exhibitions, books, and digital slideshows all dedicated, in some form or another, to Aivazovsky’s ties to Istanbul. Nor has this appreciation been limited just to his renderings of Istanbul. Aivazovsky’s marine paintings, the most numerous works in his several-thousand-strong oeuvre and the species of composition for which he is best-known throughout the world, are likewise celebrated in Turkey.

Aivazovsky mania has even reached the highest echelons of Turkish officialdom, past and present, from Ataturk to Erdogan. The stark austerity of Ataturk’s bedroom in Dolmabahçe Palace (a building designed, incidentally, by members of the Armenian Balyan family’s dynasty of Ottoman court architects) is interrupted at intervals only by wall-mounted Aivazovsky masterpieces. One would not be indulging in wild speculation in supposing that an Aivazovsky painting was in fact the last sight to present itself to Ataturk’s eyes, given that it was in these quarters that he breathed his last. A visitor to Dolmabahçe today is even permitted a view of the room, Aivazovsky’s paintings and all, as it supposedly looked on that day in 1938 when the Turkish Republic lost its founder.

Such is Turkish admiration for Aivazovsky that it has not even escaped a vulgarian like Turkey’s current president. In 2014, after swapping the office of prime minister for the office of the president without trading in his powers correspondingly, Erdogan moved into new accommodations he ordered built for himself—albeit illegally and at a cost of at least $600 million—and had the walls of his new palace beautified with Aivazovsky’s paintings. Samples of Aivazovsky’s genius can also be glimpsed in less controversial and more elegant state buildings than this palatial eyesore Erdogan now occupies, among them Çankaya Mansion (the Armenian-built palace that served as the presidential residence before becoming the prime minister’s compound with Erdogan’s 2014 switch), Topkapı Palace, Küçüksu Pavilion, and the Istanbul Military and Naval Museums.

One other wall graced by Aivazovsky paintings was that in the room in which Turkey and Russia concluded the peace treaty that brought the Russo-Turkish War of 1877-78 to an end. Of course, the peace entered into that day, with Aivazovsky’s paintings looking down on the treaty’s signatories, did not last—and with disastrous effect to the Armenians. But a shared love of Aivazovsky has endured, cutting across enemy lines and uniting Russians, Turks, and Armenians in a rare consensus. And so, in that spirit, Aivazovsky’s work and its reception remind us on this, the occasion of his two-hundredth birthday, of both the immortality and the universality of great art, starting with his own

A historian of the modern Levant, Scott Abramson is a Ph.D. candidate in the Department of Near Eastern Languages and Cultures at UCLA and a doctoral fellow at the Israel Institute.