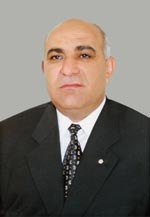 Henrik Abrahamyan was born on June 26, 1954 in the village of Mkhchyan in the Artashat region.

Mr. Abrahamyan received his degree in economics from Yerevan Economic and Legal University in 1995 and the RA Academy of Public Administration in 2002.

From 1975-1976 he worked as a senior electrician in the Mkhchyan Pumping Station. The next six years he was a brigade-leader in the Ararat Pumping Station. From 1982-1991 he was a brigade-leader in the Mkhchyan station Avtovaz; therafter he was its director for four years. In 1995 he became deputy director of the Arevshat Wine Factory and from 1995-1999 as its director.

1999-2003 was his first term as a deputy in the NA (electoral district # 30) where he served as a member of the NA Standing Committee on Defense, National Security and Internal Affairs. He was a member of the Unity Faction.

On May 25, 2003 he was reelected from the electoral district # 22 and continued working on the NA Standing Committee on Defense, National Security and Internal Affairs. He is a member of both the Republican Party of Armenia Faction and party.

Mr. Abrahamyan is married and has three children.