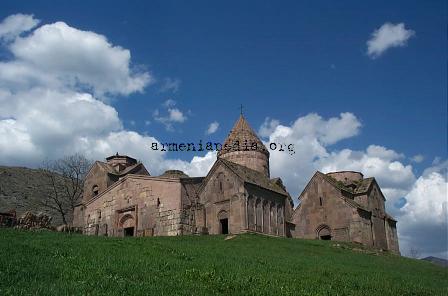 At 15.8 km is the turnoff right (S) toward Gosh and Chambarak/Krasnosyelsk. Take the first right up to Goshavank* =95= (40 43.79n x 044 59.82e) or Nor Getik Vank in the village of Gosh (1001 p). The monastery was founded in 1188 by famous Armenian cleric, scientist, author and law-giver Mkhitar Gosh (died 1213) with the help of Prince Ivane Zakarian as replacement for Old Getik Vank (SW near Martuni in Gegharkunik, on the Jivikhlu road), which was destroyed by earthquake in 1188. The monastic complex is large and well-endowed, and was for a brief period an important center of Armenian medieval culture. The architect Mkhitar the Carpenter and his disciple Hovhanes also took an active part in building the monastery. The rectangular room next to the reading room stands out from the rest of the complex by its walls of large unworked stones. In all probability, this room is a holdover from an early Iron Age fortress built on the site perhaps 2000 years before. The reading room of the monastery school itself is unusual, built in several stages, with a chapel/bell-tower built on top in 1291. Note the intricately carved khachkar, the famous "Aserghnagorts" ("embroidered"), standing beside the S. Grigory church doorway, the work of Master Poghos, dated 1291. Its mate was moved to the State History Museum in Yerevan. The Gregory the Illuminator chapel is richly carved. There is a museum in the village, along with alleged remnants of Mkhitar's house; his tomb church stands in the village W of the monastery.

St. Hripsime chapel (1254), situated south-west of the main group - a domed building, square in the plan, of an original composition. The church of Grigor Lusavorich was started in 1237 and finished by Prince Grigor-Tkha in 1241. The book depository with a bell-tower in Goshavank is a structure of a most unusual composition. Originally, before 1241. there had been in its place a small building with niches for keeping books in and with a wooden "glkhatun" type ceiling. Adjacent to it on the western side was a vast premise which probably served as a refectory and an auditorium. It also had wooden roofing. Then, a two-floor bell-tower was built over the book depository. The second stage, accomplished in 1291 by the patrons Dasapet and Karapet, where the top - a small church with two altar apses, crowned with a multicolumn rotund belfry - was completed. The entrance to the church was from the roof of the auditorium by a cantilever stone staircase.

Among the memorial khachkars of Goshavank there are unique and highly artistic ones. The khachkars created by the carver Pavgos in Goshavank stand out among the rest. The best of them is a 1291 khachkar with the maker's name carved in the bottom left star. This is a unique and highly artistic work. The finely carved lacy ornaments are arranged in layers in which the basic elements of the composition - a cross on a shield-shaped rosette and eight-pointed Starr filling the corners of the middle-cross section-show clearly. The intricate openwork ornaments vary - a clear-cut geometrical pattern constitutes the background, and the accentuating elements form a complicated combination of a floral and geometrical ornament which never repeats itself.