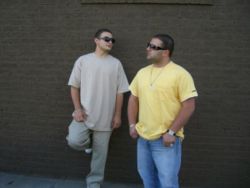 Gevork Chamichyan, better known as Gevo, was born on June 5th, 1983 in the cherished city of Yerevan, Armenia. Being the only son and 2nd of the three children, he grew up surrounded by a large loving family. There were no musicians in his immediate family, but his uncles were well- known musicians for weddings, birthdays, and other shows taking place in Armenia. Being exposed to music at such an early age truly inspired Gevo. Whether he was at home, work, or just socializing with friends, he would constantly be singing. His family and friends already recognized his talent for music and supported him greatly. Gevo’s life changed immensly when he was just seven years old. He and his family decided to travel to America. Despite the tremendous change, Gevo still entertained his dream of becoming a singer. Hovo, his cousin and now his manager, was a great help to him. His suggestions and support were irreplaceable. He always believed that Gevo would accomplish something great in the music world. In fact, Gevo first got a taste of what singing meant to him at the age of ten. While attending a friend’s birthday party, everyone insisted that Gevo go up on stage and sing. The very moment he stood on that stage, Gevo knew that this was what he was destined to do. He made progress quickly after that and released his first album when he was just twelve. Since then, Gevo has accomplished much more. Already he has released several new albums, the latest being “The Truth”, featuring the hit single “Alo Alo” with Apeh Jan and “Why” featuring Maria & Super Sako. The music video for "Alo Alo" was shot in Yerevan by world-renowned videographer Arman Ordyan in 2007 but never released for unknown reasons. In addition, there have been more than 130,000 plays in the last four months on his myspace, which has been a significant factor in his music career. He has also done shows worldwide while managing to create a music video for his hit single in July of 2006. He is planning to do a concert both in LA and in his home Armenia to help orphaned children and others in need. Being one of the few Armenian artist’s to realize and seize the potential of Myspace, Gevo began to network and spread outside of his local fan base. Word of his music spread from Armenians to Americans, Hispanics, Arabs, Lebanese and many others. For Gevo, music is more than just a pastime. It is his way of expression and achievement. Through his music, Gevo means to bring greater appreciation for Armenian music into cultures throughout the world. Most importantly, Gevo is more than a musician. His increasing fame has not changed his personality in any way. He is the kind of person who puts his friends and family first. His open-mindedness and compassion towards everyone inspires love from everyone. With a wonderful personality and vocal talent, we will be seeing more of Gevo, for this is only the beginning of a long successful career. We hope that you enjoy the site as we continue to expand and reach even higher then ever possibly dreamed of. “The key to success lies in remaining humble and being grateful to each and every person that has helped you along the way because without them future accomplishments would be unattainable.”