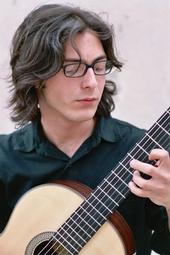 George Tossikian was born in 1981,in Piraeus,Greece. He studied classical guitar with Iakovos Kolanian, at the Modern Conservatory of Athens. At the same time, he attended several master class lessons with distinguished guitarists and teachers such as M. Barrueco, R.Dyens, O. Ghiglia and E. Asimakopoulos He graduated in 2004 with “highest distinction” unanimously. He has won several first prizes in national guitar competitions. Furthermore, he has been honoured with the prestigious distinction by the Guitar Friends Association “Dimitris Fampas” . In 2005 he gave his first recital at the Filippos Nakas" concert hall in Athens receiving great admiration and complimentary remarks by both the audience and critics. Since then he has performed on a numerous guitar recitals in several concert halls all over Greece.Also he has participated in major festivals. Noteworthy is his collaboration with the Spanish Institute “Cervantes”. In particular, he has worked and performed with the Spanish poet Antonio Ganomeda. For the last three years, he has been a member of George Varsamakis’ orchestra. He lives and teaches in Athens.