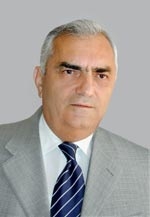 From 1960-1964 he was an engineer-constructor and later a deputy production head in the Yerevan Electrical Equipment Plant. From 1964-1966 he worked as a chief mechanic in the Abovyan Radio-Delta Plant and later, from 1966-1969, he worked as a chief engineer in the Sevan Practical Equipment Plant. From 1969-1978 he was the direc­tor of the Yerevan Mechanics Plant and chief engineer of the Industrial Department of the Executive Committee of the City Council and the Deputy Head of the State Planning Department. He spent the next four years as a chief engineer in the Garni Factory and from 1982-1999 he was the Director of Electrachshgritsark Plant.

1999-2003 was his first term as a deputy in the NA (from the proportional list of the Unity Alliance) and he was on the NA Standing Committee on Defense, National Security and Internal Affairs. He was first a member of the Unity Faction and later the People's Voice Deputy Group.

On May 25, 2003 he was reelected to the NA (from the proportional list of the Justice Alliance) and he is currently on the NA Standing Committee on Financial-Credit, Budgetary and Economic Affairs. He is also a member of the Justice Faction and the board of the Armenia People's Party.

Mr. Tsatouryan is married and has one child.