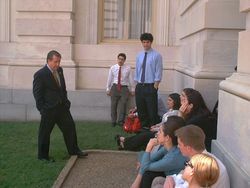 Ed Royce represents California's 40th disrict in the United States House of Representatives. He also serves on the Congressional Armenian Caucus and is very active in U.S. / Armenia relations. Congressman Royce regularly meets with the Armenian National Committee of America and Armenian Assembly of America Interns, and offers internships to Armenians in his Congressional Office.

The chairman of the Foreign Affairs Committee of the U.S. House of Representatives has reportedly called on Washington to help set a date for an internationally recognized referendum in Nagorno-Karabakh that would determine the territory’s final status.

Ed Royce, a pro-Armenian Republican from California, made the appeal in a statement late on Thursday that blamed Azerbaijan for the recent upsurge of fighting in the Karabakh conflict zone.

“Azerbaijan’s violation of the ceasefire agreement along the border with Nagorno-Karabakh is deeply disturbing,” read the statement cited by the Armenian National Committee of America (ANCA). “The resulting escalation of military activity along the line of contact has cost the lives of over a dozen Armenian and Azeri young men. A ceasefire is needed to protect further loss of life and escalation.”

“The Obama Administration should act to encourage the restoration of a ceasefire, press Azerbaijan to withdraw snipers from the line of contact, and promote a peace plan that includes a date certain of a referendum for the people of Nagorno-Karabakh to decide their own future,” added Royce.

The conduct of such a referendum is apparently one of the Basic Principles of a Karabakh settlement jointly drafted by the United States, Russia and France. The conflicting parties have for years disagreed on the date and other practical modalities of the vote.

The ANCA swiftly commended Royce for his “principled stand for security and democratic self-determination for Nagorno-Karabakh.” The influential Armenian-American lobbying group has also reported in recent days similar statements by several other U.S. lawmakers supporting the Armenian position on Karabakh. Like Royce, most of them represent California constituencies with many ethnic Armenian voters.

Royce is known as a strong supporter of official U.S. recognition of the 1915 Armenian genocide, having co-headed the Congressional Armenian Caucus until being elected as chairman of the House committee in 2012. A U.S. congressional delegation headed by him visited Yerevan and attended official commemorations of the genocide anniversary in April.