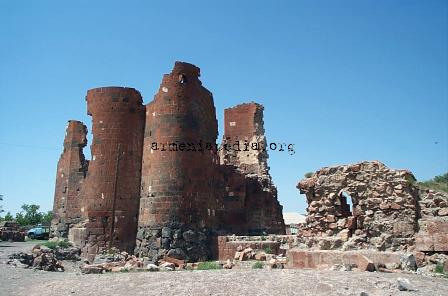 Forking left at the far end of the main square of Talin, follow the asphalt road S to Dashtadem (520 p, formerly Nerkin/Lower Talin). A few hundred meters after the electric substation, on the left rise the ruined stone walls of a large medieval caravansaray. W of the road on a hill are remains of Stone Age obsidian workshops. In the middle of the village of Dashtadem, a left turn leads almost immediately to the arched gateway to the fortress* =75= (40 20.37n x 043 51.43e). Most of the outer circuit wall dates to the last Qazar khans of Yerevan, at the beginning of the 19th c. However, the fortress is considerably earlier. The keep within is a bizarre structure, with half-round towers glued onto an earlier Armenian fortress probably of the 10th c. An elegant Arabic inscription in Kufic letters on the E wall reads: "May Allah exalt him. In the blessed month of Safar in the year 570 (September 1174) the lord of this strong fortress, the Prince, the great Spasalar, the Pillar of the Faith, the Glorifier of Islam, Sultan son of Mahmud son of Shavur." Sultan ibn Mahmud was one of the Shaddadid Seljuk princes who ruled briefly in Ani. Beneath the citadel are substantial cisterns. There is also a chapel of S. Sargis beside it, dated to the 10th c.