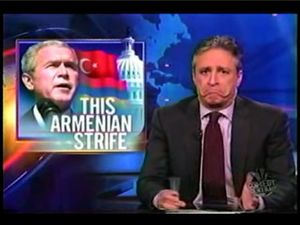 Segment on the Armenian Genocide resolution in congress.

Aasif Mandvi gives a lesson on revisionist history as it relates to American allies.

On November 3, 2010, Jon Stewart asked before taping if anyone in the audience had seen the Daily Show Global Edition, and Anoush Tatevossian said she had watched in Armenia, and after a follow-up question said she watched in the capital, Yerevan. In the taping of the show Jon mentioned that the show is watched in Armenia.