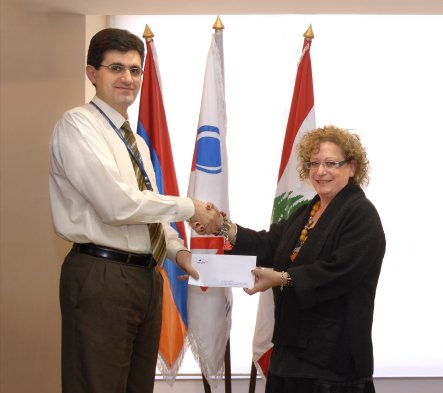 Standing for the Cause: Ralph Yirikian, General Manager of VivaCell, hands Sona Hamalian of the Ani and Narod Memorial Fund, a check for $100,000. Viva Cell’s unprecedented contribution will help eradicate measles in Armenia.

Five years ago Karabakh Telecom revolutionized the state of telecommunications in Artsakh, when it established a mobile communication network that would go on to serve most of the republic’s population.

In 2004 the company reached a new watershed when it was licensed by the Government of Armenia to launch a mobile communication network throughout the Republic of Armenia. By July 2005, the network was up and running. It has never stopped expanding since.

The launch also saw the rechristening of the company to VivaCell, a new corporate slogan designed to evoke consumer choice (“It’s your call”), and the appearance of a logo symbolizing “life, freedom, and dynamism.” With roots in Lebanon’s leading telecommunications operator, VivaCell made good on its goals in Armenia by offering top-notch customer support and a range of mobile services including SMS (Short Message System), prepaid cards, voice messaging, and GPRS functionalities that enable customers to access the Internet from their cell phones.

But beyond its technological prowess and commitment to customer care, VivaCell has proven itself to be an extraordinary champion of community give-back. With a stated philosophy of being active in social investment and engagement in cultural affairs, to date the company has made a string of donations, benefiting the First for the Children organization, the Golden Apricot International Film Festival, and the Music Groups ensemble of the Armenian Blind Society, among others. Such largesse has both bolstered VivaCell’s image and enhanced its relationship with a growing customer base in Armenia and Artsakh.

Recently the company announced two new community contributions that will help safeguard the very health of the Armenian public. Karabakh Telecom contributed $25,000 to the Ani and Narod Memorial Fund (ANMF) for immunization activities in Artsakh, and VivaCell pledged $100,000 to the Measles Eradication Campaign in Armenia. In Artsakh, the initiative will be realized within the framework of the ANMF’s Millennium Armenian Children’s Vaccine Fund. It entails the introduction of a new measles-mumps-rubella (MMR) vaccine into the National Immunization Program of Nagorno-Karabakh as well as provision of proper training on safe immunization practices to medical personnel. The $100,000 contribution pledged by VivaCell will boost the measles eradication campaign spearheaded by the World Health Organization, Armenia’s Ministry of Health, and UNICEF. The ANMF is a strategic project partner of the latter agencies in Armenia, and in Artsakh it is working independently with the Ministry of Health of the Republic of Nagorno-Karabakh.

The following is an interview with Ralph Yirikian, General Manager of VivaCell. A native of Lebanon, Yirikian embodies a vision of technological excellence with a social conscience. Guided by Pierre Fattouch, Chairman of VivaCell, he is all but rewriting the book on doing business in Armenia, and, even more importantly, sharing a company’s success with its host public.

Now a five-year resident of Armenia, Yirikian lives in Yerevan with his wife and two children.

What is your definition of a dynamic company?

VivaCell is a dynamic company and my answers to the questions that follow will tell you why.

Beginning with your company’s roots in Lebanon, you’ve dealt with various countries and cultures. How do you see your experience in Armenia and Artsakh so far?

As an Armenian born and raised in the Diaspora, I learned about Armenia and Artsakh through textbooks or during commemorative events such as May 28 and April 24. But when I moved here and got to meet and interact with the people of post-Soviet Armenia and Artsakh, I had to readjust my perspective a bit. Somehow things were not as I had expected them. Gradually, however, as I lived in the local community, I had a better grasp of what makes my compatriots tick and the realities they faced, even if I disagreed with them on some issues. Overall, I’d say this has been a unique and enriching experience for me. You live and learn.

VivaCell’s corporate slogan, “It’s your call,” is about freedom. Specifically, it’s about freedom of choice. Based on your interaction with the Armenian public, do you believe it’s on the right path to improving its quality of life?

Our slogan is indeed about choice. We respect our competitor in the telecommunications market, and we wanted to emphasize the Armenian consumer’s freedom to choose. I think this is quite healthy. As for the Armenian public’s larger, collective choices as they relate to its future, I think there’s been considerable improvement in the past few years, and I believe that better access to technology and information will pave the way for further improvements down the line.

Community give-back has gone hand in hand with VivaCell’s growth. Why do you think it’s important to a company?

Perhaps I am one of the very few people in Armenia who believe in corporate social responsibility, or CSR. And I have always said this to other suppliers, to key people, to my colleagues and staff at VivaCell: that as long as we work in Armenia and Artsakh and are successful at what we do, we have an obligation to share some of our profits with the very public that has enabled us to make it here. There are a lot of segments of Armenian society in need of urgent assistance, and it’s our responsibility, as a successful corporation, to reach out to them and do what we can.

To date, VivaCell has supported a variety of social and cultural causes. Does this reflect a long-term commitment to social investment and engagement in cultural affairs?

You bet! Make no mistake about it. As I said earlier, CSR is one of the most important issues for us. We work with our staff to guide them toward those values, as we believe the virtues of the company must be indistinguishable from those of CSR. Being an organic part of society is important. With this corporate philosophy, we seek to develop a more forward-thinking mindset. This is the future, this is how we prepare the future generation.

Recently Karabakh Telecom contributed $25,000 to the Ani and Narod Memorial Fund for immunization activities in Artsakh, and VivaCell pledged $100,000 to the Measles Eradication Campaign in Armenia. It must be gratifying to help foster the very health of the Armenian public…

It is more than gratifying… I personally feel a profound sense of fulfillment in relation to my people. It is very important to be part of projects such as these, and I wish we could do more. If other companies, large or small, also contributed to social and cultural causes locally, we could lift Armenia and Artsakh to a much higher standard of living in no time. I say it again: I wish we could contribute more, but at the moment we’re doing everything we can and we will continue to strive to do more.

Where do you see the role of the private sector in helping realize a significant goal such as the eradication of measles in Armenia, in light of its current socio-economic circumstances?

I wish others would show concern for causes such as the eradication of measles in Armenia. All sources of aid, including and especially the private sector, must be engaged in consistent social investment. This is what I said in my address at the opening of Global Compact: we, as companies, must not give to social causes to please a president or to please a prime minister or to please an NGO. Rather, we must do it because we have to believe in believing in Armenia. We must think Armenia, breathe Armenia. Not the Armenian per se, but Armenia. If we don’t have faith in these virtues, we cannot survive in this work. Today we have a considerable private sector in Armenia and we should never forget that the platform for our operations is Armenia. Believe in Armenia, and that’s where the private sector can make a difference. It’s only then that the general outlook will change and the private sector will have a more active role in the shaping of the country’s future.

As a father and someone who has lived in Armenia for the past five years, what kind of future do you envision for the children of this republic and also of Karabakh?

Things are getting both more complicated and more exhilarating. The outside world is pressing on the local environment; the diaspora is really contributing a lot to introduce a lot of changes; freedom of choice is increasing; people go out and come back with wider horizons, new ideas and ways of thinking, and novel cultural perspectives. All this is effecting life and trends in Armenia in varying degrees. Whether we like it or not, it will also probably affect how we raise our children.

The key factor is, we as a nation, as a people, must have faith in Armenia and Artsakh. Practically speaking, such faith must translate into an unswerving tradition of community giving, because the more active we are in the social and civic spheres, the better chance our children will have to grow up into a higher standard of living, better educated, and better equipped to make it in the world.

What’s next for VivaCell, in terms of service, technology, and operational expansion?

Our company’s journey so far has been a great one. The more we discover, the more we grow. Having accomplished our second expansion, we are now in the third phase. We will do whatever it takes to excel at the products and services we are committed to. Our growth plans comprise not only Armenia and Artsakh, but also border regions.

Well, we started this conversation with “It’s your call,” and now we’re concluding it with the same slogan. I like this cyclical aspect, this recapitulation. To me, “It’s your call” is just about the ultimate expression of liberty. And I love it!