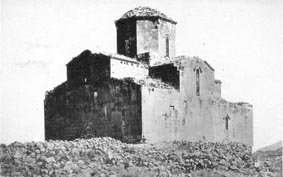 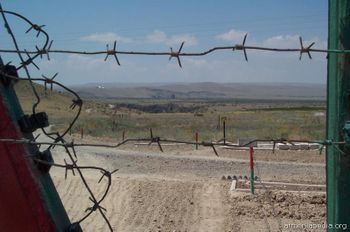 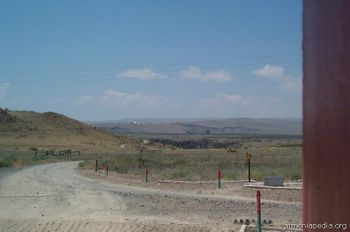 Armenian Cathedral Near Kars, Turkey, On Verge Of Collapse - US Expert Alarms

Dr. Christina Maranci, Arthur H. Dadian and Ara T. Oztemel Associate Professor of Armenian Art and Architecture at Tufts University in Medford, Mass., has issued a call to save the 7th century Mren Cathedral of Armenia, located in the Kars region of present-day Turkey, The Armenian Reporter writes.

According to Dr. Maranci, "the cathedral of Mren is now in danger of collapse. Constructed circa 638 AD, Mren is a masterpiece of world art and a product of the 'Golden Age' of Armenian architecture. Bearing an inscription naming the Roman emperor Heraclius, and a unique sculpted relief image of Heraclius returning Christendom's greatest relic¬-the True Cross-to Jerusalem, Mren preserves precious material evidence for one of the most dramatic and yet poorly documented moments in history.

It is also the largest domed basilica surviving from the region, and a key example of the architectural achievements of the seventh century."

Dr. Maranci stresses that Mren may not be standing much longer.

"Photographs from the 1990s to the first decade of the 21st century show the progressive collapse of the south facade. Now the entire south aisle lies in rubble on the ground, severely compromising the domed superstructure of the monument and opening the interior and its wall paintings to the elements," she says. "The prospect of stabilizing what is left is at present doubtful, however, because of Mren's position within a military zone in Eastern Turkey (Kars province) next to the closed Armenian-Turkish border. Visiting the site is forbidden."

Dr. Maranci is campaigning to raise awareness about Mren's precarious condition. "Mren has stood for over a millennium, bearing world history on its walls," she says. Its collapse would represent a tragic loss to human knowledge."

Christina Maranci: Save Mren Cathedral from Collapsing - Call For Action

Mren Cathedral (in Kars region of Western Armenia), which is considered a Masterpiece of world art and the product of the Golden Age of Armenian Architecture, is still on the verge of collapse. Mren is included in the World Monuments Fund Watch List and needs urgent action to be saved. Panorama.am has conducted an interview on this issue with Dr. Christina Maranci - Arthur H. Dadian and Ara T. Ozetemel Associate Professor of Armenian Art at Tufts University and one of the world's authorities on the Cathedral of Mren.

Nvard Chalikyan: Dr. Maranci, in 2013 you issued a call to save the 7th century Mren Cathedral in the Kars region of Western Armenia (present-day Turkey). You have warned that the Cathedral, which is referred to as =80=9Ca masterpiece of world art and the product of the Golden Age of Armenian Architecture', is on the verge of collapse. What is the main significance of Mren Cathedral both as an architectural and religious monument?

Christina Maranci: Mren is important as the largest surviving domed basilica of seventh-century Armenia, and one of the largest (Ani Cathedral is actually slightly shorter in length). It is a particularly refined example of the domed basilica - with carefully moulded piers articulating and emphasizing the soaring verticality of the central domed bay. It is rightly called one of the masterpieces of the `Golden Age' of Armenian architecture for these reasons. It also preserves, as I have shown recently, the most extensive fresco program of seventh-century Armenia, and the earliest Armenophone biblical inscription (preserving Psalm 92/93:5), located in the triumphal arch. Scholars have also called attention to the church as a critical monument of the eastern frontier and the Byzantine consolidation of this region by the emperor Heraclius (610-641)-he is named in a precious inscription on the west façade of the church, and may be represented in the bas-relief on the north portal lintel, returning the True Cross to Jerusalem. The west façade portal is also sculpted with images of Christ, angels, saints, clerics, and princes, making this church of great value for its architecture, epigraphy, and sculpture.

N.C.: What is currently the condition of Mren?

Christina Maranci: Very bad. The south wall collapsed, as is known, in the early twentieth century. What was a large hole in the southwest corner of the church in the 1990s gradually became larger, and now the façade, along with its corpus of medieval inscriptions, is on the ground. There is also now a crack running along the northwest corner of the church. The dome piers have been undermined and damaged, as have the remaining facades, and so there is little to support the superstructure, and the dome is not sufficiently or symmetrically supported. The famous lintel showing Heraclius (most likely) is also not supported on its left side, but simply hangs in the air.

N.C.: What is the approach of the Turkish authorities to the fate of this cathedral?

Christina Maranci: For many years, there was no possibility of doing anything to this site, in part because of the fact that Mren lies in a military zone. But I have just learned that the Ministry of Culture has authorized a project there for this year, and that it will involve Armenians. This is a very exciting and important development, and I am hopeful that the work can be started before it is too late.

N.C.: Dr. Maranci, thanks to your efforts Mren was included in the World Monuments Fund Watch List 2014-2017. How can this contribute to the preservation of the monument?

Christina Maranci: The importance of the Watch List is that it brings attention to otherwise obscure monuments- the Watch List is a kind of official, but non-governmental recognition that a monument is worth saving-and this, in itself, is a good first step towards establishing the basis for a project. I hope in the future that other sites in historic Armenia also achieve this status. It is also important to note that unlike UNESCO World Heritage Site system, the WMF Watch List is not a permanent designation; rather, it is intended as a call to action, and that is what we hope will happen at Mren in the next two years while it is on the list.

N.C.: Is it now possible to access the site or does it still remain closed for the visitors?

Christina Maranci: Yes and no. I am frankly unsure of the current status of the region of Mren as part of a restricted military zone. For all I know, it may still be officially closed, although the area seems less militarized. But having said that, empirical evidence suggests that Mren is now accessible to visitors: I know of increasing numbers of people who have gone to Mren recently, including myself!

N.C.: What other steps have been and should be taken to save Mren?

Christina Maranci: I think that the process of raising awareness of the church is an important first step towards saving Mren. Now, the next step will be a good survey of the site and the monument, and then the stabilization of the weak parts. I think these two things should be done as soon as possible, hopefully this year.

N.C.: How can one get involved in this campaign?

Christina Maranci: Anyone who is interested should tell friends and colleagues about Mren and its importance. The more people know about it, the better. To learn more about the World Monuments Fund, go to their website: http://www.wmf.org/project/cathedral-mren.

N.C.: How would you describe the overall state of Armenian monuments and churches in Western Armenia under Turkish rule? Are most of them endangered (any other cases to highlight)?

Khtskonk, the monastery buildings of Hoá¹=99omos, Bagnayr, and so many others are in perilous condition.

N.C.: What would you say is the general approach of the Turkish government towards the Armenian monuments there?

Christina Maranci: It is a complicated question to answer. My instinct would be to say negative, but my own experience has been that there has also been a lot of indifference... However, I would also like to say that there are many non-governmental individuals - scholars, philanthropists, etc.-in Turkey who have been at the forefront of campaigning for the Armenian monuments. I must be hopeful that the changes, which can be glacial in politics and diplomacy, will happen soon enough to save these monuments.