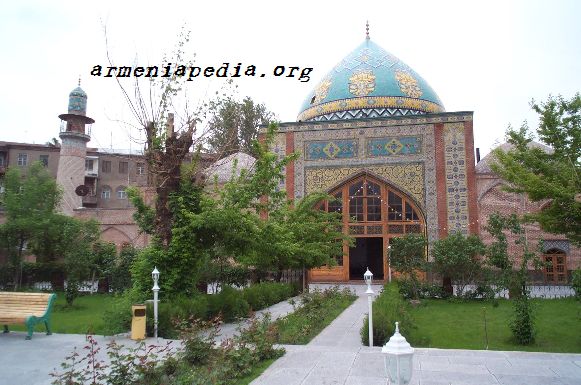 Located across the street from the covered market (pag shuka) on Mashtots.

The largest mosque of Yerevan and only one still preserved, the Gyoy or Gök-Jami, (gök means "sky-blue" in Turkish - more commonly known as the Blue Mosque) was built in AH 1179 or AD 1765/6 by the command of local ruler Hussein Ali-Khan to be the main Friday mosque. The mosque portal and minaret were decorated with fine tile work. The central court had a fountain, with cells and other auxiliary building around it, and stately elm trees. There was an adjoining hamam and school. In Soviet times, the mosque housed the Museum of the City of Yerevan. In the mid-1990s, the powerful Iranian quasi-statal foundation for religious propagation agreed to fund a total restoration of the mosque with shiny new brick and tile. This restoration, structurally necessary but aesthetically ambiguous, was largely finished in 1999. However, Armenian authorities, torn between the need to placate a powerful neighbor and desire to minimize the practice of an unpopular religion, have been slow to bless the reconsecration of the complex as a mosque, suggesting it should serve as a cultural center instead.

On weekdays you can visit an exhibit of photos of old Yerevan in the compound. The guards are friendly, but have strict instructions as to where you can and cannot wander on the grounds. 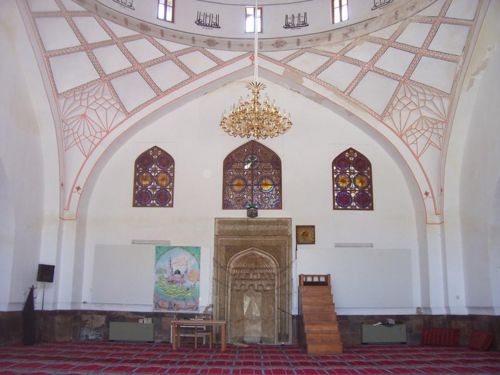 Interior of the Blue Mosque of Yerevan