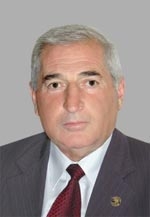 Artak Arakelyan was born on August 28, 1945 in the village of Gandzakar in the Ijevan region.

Mr. Arakelyan received his degree in Armenian language and literature from the Khatchdur Abovyan Pedagogical Institute in 1973.

From 1961-1979 he worked first as a worker and later as a skilled worker, then sen­ior skilled worker, head of unit, and eventually head of a production in the AUC Yerevan Educational Supplies Company # 3. From 1979-1986 he headed the AUC Echmiadzin Company. From 1980-1991 he was a teacher in the Yerevan boarding school for the blind and weak-sighted. For the next twelve years he worked first as a head of the pressing unit and later as a senior controller, deputy director and operations worker in the AUC Company # 3. Mr. Arakelyan is the president of two NGOs, the Armenian Union for Support to the Disabled and the Armenian Union of Small Businesses.

On May 25, 2003 he was elected as a deputy of the NA from the proportional list of the Rule of Law Party where he sits on the NA Standing Committee on Social, Health Care and Environmental Protection Affairs. He is also a member of both the Rule of Law Faction and party, and is a secretary of the Council of the Disabled under the Chairman of the NA.

Mr. Arakelyan is married and has five children.