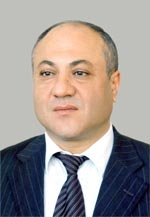 Mr. Mkhitaryan graduated with a degree in history from the Khatchadur Abovyan Armenian State Pedagogical Institute in 1981.

From 1981-1986 he worked first as a laboratory assistant and later professor of sociological subjects in the Soviet Economy Technical College in Nor Geghi (Nairi region). In 1985 he served in the Soviet Army. From 1986-1988 he was the secretary of the LCYU Committee of Nor Geghi Soviet Economy Technical College. He spent the next five years as the deputy director of Universal Cooperative Firm. From 1993-2003 he was the director of Nor Geghi Aghavni Ltd.

On May 25, 2003 he was elected to the NA from the proportional list of the Rule of Law Party, he is currently on the NA Standing Committee on Foreign Relations. He is a member of both the Rule of Law Faction and party.

Mr. Mkhitaryan is married and has three children.