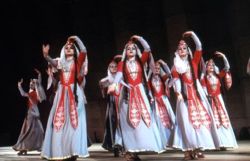 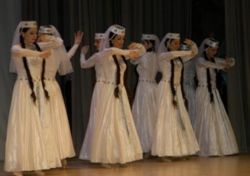 The Armenian dance heritage has been one of the oldest, richest and most varied in the Near East. From the fifth to the third millennia B.C., in the higher regions of Armenia there are rock paintings of scenes of country dancing. These dances were probably accompanied by certain kinds of songs or musical instruments. In the fifth century Moses of Khoren (Movsés Khorenats'i) himself had heard of how "the old descendants of Aram (that is Armenians) make mention of these things (epic tales) in the ballads for the lyre and their songs and dances. Traditional dancing is still popular among expatriate Armenians, and has also been very successfully `exported' to international folk dance groups and circle dance groups all over the world. The majority of people feel something special in Armenian dances, and in the passion, subtlety, and eloquence which they embody.