After proclamation of independence Armenia put into circulation own national currency – Armenian Dram (Armenian: Դրամ; code: AMD), the usage of which revealed the necessity for a monetary sign. As the result of common business practice and the unique pattern of Armenian letters the shape of the sign and its variations appeared in the business scratches. Since that time and until the official endorsement of the sign a number of artists and businessmen developed and offered various shapes for it. Now Armenian dram sign (symbol) is present in the Armenian standard for the national characters and symbols and in the Armenian computer fonts. 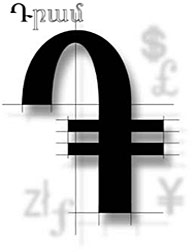 The original idea by K. Komendaryan for the Dram Sign shape among the other symbols. Euro was not announced yet.

There is a strong belief that the shape of Dram Sign (symbol) is a direct projection of the Armenian alphabet – the brilliant work of Mesrop Mashtots. It is not hard to notice the clean-cut geometry of Armenian letters, so did the author of the Sign when studied the alphabet. Later he became a proponent for the hypothesis [1], which states that the prototype of the Armenian alphabet is a variety of combinations of resembling curves and horizontal elements. Subsequently these horizontal elements played a key role in the Sign development. 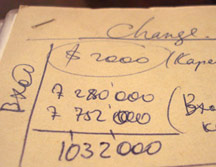 Apparently, the sign was emerged on 7 September 1995. This date refers to the specific page in the preserved scratches for cash flow of a start-up company. Since that date the sign together with the dollar sign is constantly present in cash flow records (euro was not in circulation yet), and no evidences for earlier dates are tendered by anybody yet.

The objective of the sign is to symbolize the Armenian national currency and come in handy wherever a graphical symbol for the currency would be in demand, for instance in: financial documents, price-lists and tags, currency exchange displays, computer fonts, correspondence, etc.

At the time of the sign’s development were outlined the definite fundamental criteria for it, namely the sign has:

The exceptional chance to present the sign to Republic of Armenia became real in connection with celebration of the 1700th Anniversary of Christianity Proclamation in Armenia as state religion in 2001. The sign's proposal has been presented to the President of the Republic of Armenia, at that date Mr. R. Kocharyan. Together with this gift a special letter with congratulation on the Anniversary has been sent to the Catholicos of all Armenians Garegin II.

The Council of the Central Bank of Armenia handling the proposal announced the contest, entertained the offer among the other proposals and approved it together with the similar one. CBA Panel Ordinance declared to "accept the designs of Dram Symbol presented by K. Komendaryan and R. Arutchyan". Then the Symbol has been passed to the state organizations for the official processing and standardization. [2] 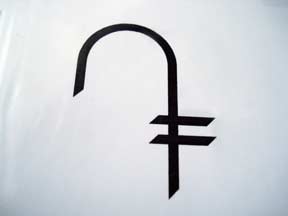 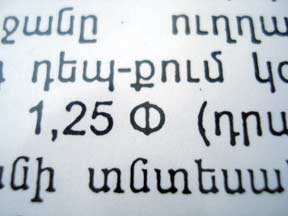 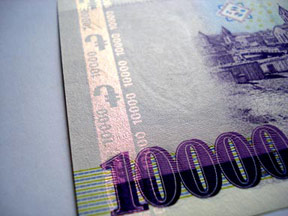 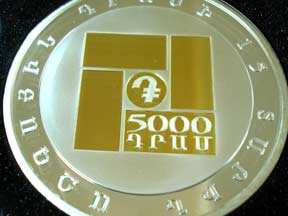 Since year 2008 the original shape of the Sign is present on the reverse side of 5,000 Armenian Dram commemorative coin.

The graphics of the symbol is based on the shape of the first letter of Armenian word "դրամ" (money, pronounced as "dram"). The transformation of the letter toward the monetary symbol is done in accordance with the graphics of the range of foreign monetary signs. As a result, the sign combines its Armenian origin with the two strokes present in the majority of other monetary symbols. The meaning of those two strokes is being revealed by the author’s in his lectures.

To ensure protection of authorship the author has sent requests to Armenian National Standards Institute in 1997 and Copyright Bureau of Library of US Congress in 2001. However, the Article 6 of Law on Copyright and Neighboring Rights adopted by the National Assembly of Armenia on 8 December 1999 and revised on 15 June 2006, assert that state emblems and signs are not considered as objects for copyright. Hence, the dram symbol may be referred to national attributes, the mandatory items of which are flag, national seal, anthem and money.

There are the international and republican standards pertinent to money and its symbols:

In 2007 Armenian National Institute for Standardization, Measurements and Metrology made an amendment to the Сharacter Sets and Keyboards table and enacted to replace the collocation “Dram sign” by the graphics of the symbol.


On 15 June 2011, the Unicode Technical Committee (UTC) accepted the dram sign for inclusion in the future versions of the Unicode Standard and assigned a code for the sign - U+058F (֏). In 2012 the sign was finally adopted in the Armenian block of ISO and Unicode international standards [3].

Upon creation of Sign’s original shape a number of designs for it were developed to conform to the most popular font styles and their derivatives (italic, bold). In 2001 the designs together with the original shape were gifted to the Republic as templates for the national font sets. Below are presented three main templates, however, now there is a variety of the sigh shapes in the Armenian computer fonts.

In 2008 under the auspices of Ministry of Culture of Armenia and Microsoft-Armenia in National Book Chamber of Armenia took place "Granshan 2008" competition for the complete set of Armenian letters and characters, for which were developed styles for the Sign among the other characters and symbols.

The Sign’s official presentations have been conducted by the author at the Central Bank of Armenia and at the First historical Congress of Armenian Technologies ArmTech 2007 in San-Francisco, north to Silicon Valley. Also, in order to promulgate it the author arranged lectures at American Corners of Yerevan and Gyumri, and Armenian State University of Economics in Yerevan and Yeghegnadzor, CRRC office, Dilijan college and Armenian National Lyceem after Anania Shirakatsy [4]. Besides, he created this and other similar articles and conducted a presentation at the Public Library after A.Isahakyan, Yerevan.


In connection with celebration of the 15th Anniversary of Armenian Dram in November 2008 the Central Bank of Armenia issued a commemorative coin with the Sign on the reverse side just against Noah’s Arch on the National Coat of Arms on obverse. The same year the Sign was widely populated in a number of local periodicals [5] [6] [7] [8] [9] [10] [11] [12] [13].
In 2011 Dram sign appeared on the renewed official site of CBA and in the design of its new Visitors Center.