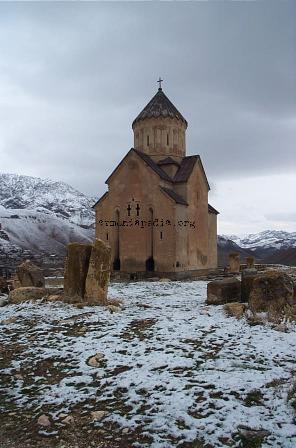 The village of Areni (1730 p, formerly called Arpa) is famous for its wine, much of which is produced in Getap further down the road. Visible to the right of the main road is the Astvatsatsin =40= (Mother of God) church of 1321, built during the tenure of Abbot Hovhannes. The architecture as well as the carvings are the work of Momik, and there are interesting tombstones outside. To reach the church, turn S into the village, cross the bridge, and turn left on a clear road up to the church. There are ruins of the medieval mansion of Tarsayich Orbelian in the valley and, reportedly, remains of a cyclopean fort SE of the village on the edge of gorge and a 13th c. bridge on the Arpa r. built by Bishop Sargis (1265-1287); further along the gorge toward Arpi, on a hill on the S rim of the gorge, is the ruined 13th c. fort of Ertij. In Areni was found in 1981 an altar with a Greek inscription of AD 163 dedicating it to the Olympian Goddess on behalf of a Roman officer, Aemilius Ovalis, of the 15th Legion Apollinaris.