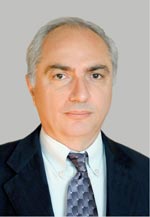 Mr. Sargsyan graduated from Yerevan State Pedagogical Institute of Russian and Foreign Languages (Bryusov Institute) in 1972 and from Moscow Highest Youth Communist School in 1974. He is a teacher of Russian language and literature.

From 1966-1968 he was a worker in the Industrial Complex under the Chorus Society. From 1968-1971 he worked first as a literary specialist in a factory newspaper, later as a specialist in the personnel department and eventually secretary of LCYU Committee in the Yerevan Tire Factory. From 1971-1972 he was a literary specialist for Komsomolets newspaper (Yerevan). From 1974-1976 he was a correspondent for Komsomolskaya Pravda newspaper (Moscow). From 1976-1977 he was the head of Propaganda and Cultural Division of LCYU Central Committee. In 1978 he was appointed instructor in the Party Organization Division of the ACP Central Committee. From 1979-1989 he was the correspondent of first Komsomolskaya Pravda and later Pravda in Armenia. In 1990 he was the secretary of the ACP Central Committee. In 1991 he was the first secretary and the president of the Armenia Democratic Party. From 1992-1995 he was the general editor of ADP Azdarar newspaper. From 1998-1999 he was an advisor to the NA President.

On May 25, 2003 he was elected to the NA from the proportional list of the Justice Alliance and he is currently on the NA Standing Committee on Foreign Relations. He is a member of the Justice Faction and the founding president of the Armenia Democratic Party.

Mr. Sargsyan is married and has three children.