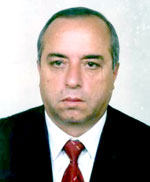 Alexan Petrosyan was born on January 5, 1956 in the village of Bambakashat in the Hoktemberyan region.

Mr. Petrosyan graduated with a degree in engineering technologies from the Armenian Agricultural Institute in 1977.

From 1978-1991 he worked as an engineer-technologist in the Hoktemberyan Wine Factory. For the next fourteen years he worked first as a head of a production unit and later director of the factory. Since 1995 he has been the executive director and the board president of MAP CJSC in the village of Lenoughi in the Ejmiatsin region.

On May 25, 2003 he was elected to the NA from the proportional list of the Rule of Law Party and he is currently on the NA Standing Committee on Financial-Credit, Budgetary and Economic Affairs. He is a member of both the Rule of Law Faction and party.

Mr. Petrosyan is married and has three children.