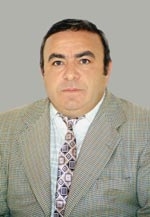 Vram Gyulzadyan was born on November 10, 1957 in the village of Vardablour in the Stepanavan region.

Mr. Gyulzadyan received his degree in agriculture from the Armenian Agricultural University in 1986.

From 1976-1978 he served in the Soviet Army. From 1980-1981 he worked as a division leader in the Vardablour State Economic Office. For the next decade he worked first as an agronomist and later director, chief agronomist and then head of the agricul­tural collective farm in the Sort Experimenting Unit. From 1994-1996 he served as a head of Vardablour Village Council. From 1996-1999 he was served as head of the Village Community Council.

1999-2003 was his first term as a deputy in the NA (electoral district # 53), where he served on the NA Standing Committee on Social, Health Care and Environmental Protection Affairs. He was a member of the Stability Faction and later the Agrarian-Industrial People’s Coalition Deputy Group.

On May 25, 2003 he was reelected to the NA from electoral district # 38, where he serves on the NA Standing Committee on Social, Health Care and Environmental Protection Affairs. He is a member of both the Rule of Law Faction and party.

Mr. Gyulzadyan is married and has three children.