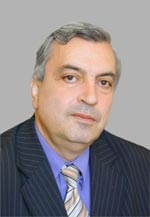 Mr. Maroukhyan graduated from the Yerevan Polytechnic Institute in 1969. He is an engineer thermo-energy specialist, professor and has a PhD in Technical Sciences. He is also a current member of Armenia Engineering Academy.

Mr. Maroukhyan is married and has two children.