From armeniapedia.org
(Redirected from Vazgen Manukian)
Jump to: navigation, search 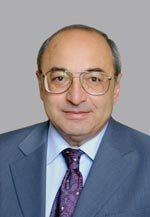 Mr. Manoukyan graduated with a degree in mathematics from Yerevan State University in 1967. He is a docent and has a PhD in Physical and Mathematical Sciences.

From 1971-1972 he did his postgraduate studies at the Syberian Department of the USSR Academy of Sciences. From 1972-1995 he was a professor at Yerevan State University. He was also a member and the coordinator of the Karabagh Committee. From December 1988 to May 1989 he was detained together with the other members of the committee. In 1989 he was elected head of the board of the Armenian National Movement. From August 1990 to September 1991 he was the prime minister of the Republic of Armenia. From 1992-1993 he was the RA Minister of Defense and in 1993 he was the president of the RA Center of Strategic Studies.

In 1990 he was elected to the Supreme Council (electoral district # 10) and he was a member of the National Democrats Deputy Group.

From 1995-1999 was a deputy in the NA (electoral district # 20) and he was the leader of the National Democratic Union Faction.

On May 25, 2003 he was reelected to the NA from the proportional list of the Justice Alliancea nd he is currently on the NA Standing Committee on Science, Education, Culture and Youth Affairs. He is a member of the Justice Faction. He is also the founding president of the National Democratic Union.

Mr. Manoukyan is married and has three children.

His response to smoking restrictions introduced by the parliament:

“I was categorically against that law,” he complained, puffing a cigarette. He said anti-smoking campaigns can only work in Western democracies. (RFE/RL 2006/3/1)