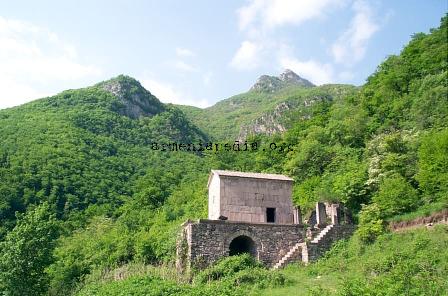 Vahanavank Monastery - side church and mountains

5 km towards SW of Kapan, one of the medieval Armenian historical monument-complexes is situated at the foot of Tigranasar mountain rising on the right bank of Voghji River. According to lithographic sources Syunik's ruler Dzaghik's son Vahan built Vahanavank (Վահանավանք) in the beginning of X c. A spiritual school was opened by this huge convent with more than 100 preceptors, where studied young boys from Baghk and other provinces. In 40's of X c Vahanavank's abbot becomes its own pupil Vahan II Jevanshir, which later on becomes the spiritual leader of Syunik region, and then the Catholicos in 60's. During his power he built a great many constructions, which preserved only as ruins.

Vahanavank reaches pick of its fame during Syunyats kingdom. But many foreign invasions eventually make it unnoteworthy and in XIV c it becomes a full of ruins. Vahanavank woke up from its ages-lasting sleep when in 1966 excavations began here. Thank to excavations the following constructions came out under the thick ground and nature.

Gregory Illuminator church was built by Vahan Nakhashinogh in 911. Cruciform in scheme, with cruciform dome this temple in right and left sides of eastern bay, as well as by the western pillars has vestibules. The drum rises on huge steeple rocks. The building at first was built from pumice stone, the remainders of which preserved on the southeastern wall. The church had two entries from west and south. The vestibule was built by Vahan Jevanshir in first half of X c. This rectangle-square in scheme construction stands out with cornices decorated with vegetable and animal ornamental motives, which border the southern and northern walls.

Hors-shoe-shaped three strong arches leaning on beautiful unique bays, without any connecting material, carried the roof of the vestibule. The vestibule was destroyed because of the middle arch ruined during the earthquake. The entry was from south. 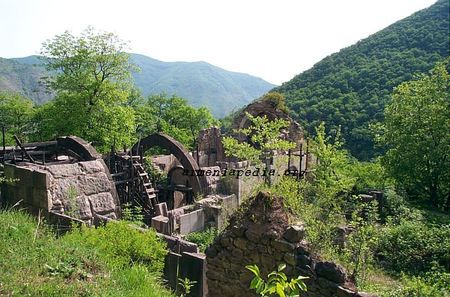 Portico: this unique architectural example with 140 m2 territory was built along the St. Gragory Illuminator church and vaulted vestibule. By the discovered architectural details we can guess that the opposite arches of the portico's roof leaned on 14 bays (7 from north, 7 from south). One of the southern entries takes the church, and the other- to the vestibule. The building just like the whole complex was built from reddish limestone. The portico also served as family cemetery. Here are buried kings Smbat II, Grigor I, queens Sophy and Dinar, Prince Ashot Jevanshir, Khaghbak and others. A building inscription of 1046 was found here.

Syunyats queen Shahandukht II built two-storied mausoleum-church (St. Virgin) in 1086. This comparatively small temple leans on rocks from west, and from east it stands on the vaulted entry of the serf wall built of split stone. The eastern bay used to have a stage with window-passages on its right and left sides. The roof of the church was tiled (just like all the constructions of Vahanavank).

From south, north and east it was belted with a portico, about which tells XIII c historian St. Orbelyan.

From the top story of the temple a beautiful sight opens towards Vahanadzor (canyon) and the big temple. The valuable inscription of Catholicos Stepanos (XI c) was found in the vestibule of St. Virgin's church.

Refectory: the whole construction was under ruins and was opened only through excavations.

The arch-pillars attract a special attention, the cornices of which were painted red. They are placed in the eastern side of the construction and prompt about the fact of its being an open hall. The floor of the room is covered with slab stones. The discovered architectural details (bays, arches, pillars and other things) give some reason to suppose that this building was two-storied too. Here were found splinters of huge inscriptions (XI c) as well as tombstones of some spiritual personalities. The ruins of settlement in the southeastern part of the complex must be paid great attention to. A cold spring built in X c (clay processed) still flows out here. Many noteworthy khachkars are placed in the territory of Vahanavank.

Restoration works of the complex began in 1978 and stopped before completion.

Just south of the highway, not far from Kapan is the monastery of Vahanavank. Vahanavank is built in the lush forests, and has a style all its own. Unfortunately a large part of it is in ruins. Being close to the main highway means that biking and taking a bus are both options. The bus may only stop by once a day however, so hiking/hitching 6km to Kapan may be worthwhile. The main road W from Kapan runs along a pleasant gorge. After about 6 km, near the village of Shharjik, a paved road on the left angles down across the Voghji river, then runs back SE to the monastery of Vahanavank*. This was founded in 911 by Vahan, son of Prince Gagik of Kapan, who (as Stepanos Orbelian reports) took on a monk's robe and lifestyle to cure himself of demonic possession. Gathering 100 like-minded clerics, he built the original S. Grigor Lusavorich church, and was buried near the door. His equally royal nephew, also Vahan, was educated at Vahanavank and rose to be Bishop of Syunik and then Catholicos. The monastery became the religious center of the kings of Syunik in the 11th c. Queen Shahandukht built the Astvatsatsin church as a burial site for her and her relatives. The site is lovely, the ruins evocative, and a small team led by Academician Grigor Grigorian is attempting to restore as much as possible. SE of Vahanavank is a large tomb field of the end of the 2nd millennium BC. The next turnoff leads to a summer camp and a rather snazzy guesthouse belonging to the Marzpet’s office. There is allegedly excellent rock-climbing nearby. The former village of Musallam has a 13th c. bridge on the Geghi river and an 11-13th c. church. (Source: Rediscovering Armenia Guidebook.)