From armeniapedia.org
(Redirected from Vahan Hovannisian)
Jump to: navigation, search 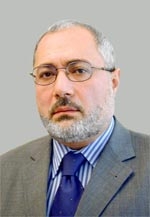 Vahan Hovhannisyan was born on August 16, 1956 in Yerevan.

Mr. Hovhanissyan graduated with degrees in history and archaeology from the Moscow Pedagogical Institute in 1978. He is a Historical Sciences PhD.

From 1978-1980 he served in the Soviet army. He spent the next nine years work­ing first as a scientific assistant and later as a head of the scientific research division in the Erebuni Museum. In 1989 he worked as a scientific associate in the Institute of Archaeology and Ethnography under the Academy of Sciences. From 1990-1992 he took part in the Artsakh liberation movement. From 1990-1992 he was a member of the Armenia Central Committee of the Armenia Revolutionary Federation and from 1992­1995 was a member of its bureau. From 1995-1998 he was detained for a political cause (the allegation was not confirmed). From 1998-1999 he worked as an advisor to the President and head of the Commission on Issues of Local Self-Governance.

1999-2003 was his first term as a deputy in the NA (electoral district # 17) where he served as Chairman of the NA Standing Committee on Defense, National Security and Internal Affairs; he was also a member of the Armenian Revolutionary Federation Faction.

Mr. Hovhannisyan is married and has two children.

If Baku doesn’t want to hold talks with Stepanakert, Yerevan will negotiate with Ankara but not with Baku

However, he said, Nagorno Karabakh should join the talks. “We are told that Azerbaijan’s concession is peace. But “peace for peace” formula doesn’t reflect the reality, since mutual compromises should have a different shape. Azerbaijan avoids this variant by all means. If Baku doesn’t want to hold talks with Stepanakert, Yerevan will negotiate with Ankara but not with Baku. Unfortunately, Turkey is a member of the OSCE Minsk Group on the Nagorno Karabakh conflict settlement and influences on the process. Official Yerevan and Diaspora should counteract this and urge to expel Turkey from the Minsk Group as an interested party,” Mr Hovhannisian said.

The decision to convene in Minsk an international conference on Nagorno Karabakh was taken March 24, 1992 at the extraordinary sitting of the Council of Ministers of the OSCE member states. Bulgaria, Germany, Italy, Russia, U.S., Turkey, France, Czechia and Sweden formed the Minsk contact group to settle the armed conflict between Azerbaijan and Armenia.

Presently, the MG is chaired by Russia, U.S. and France.

Till 1997 Nagorno Karabakh was a full party in the talks. Now talks are held between Armenia and Azerbaijan.