Best way to reach Tsaghkadzor, Armenia’s premier sports facility and the former training ground of the Soviet Olympic Ski Team, is to make a U-turn (at the marked location) just after the second (now non-existent) Hrazdan exit from the Sevan highway. At 4.2 km, one goes straight at the large traffic circle. At the second traffic circle (0.7 km further), going straight takes one to Tsaghkadzor =70= (40 32.00n x 044 42.50e) (1578 p, in Persian times Darachichak), the Kecharis Monastery* =75= (40 32.02n x 044 43.05e), and the ski slopes. Right goes to Meghradzor and Hankavan.

There is a seperate page about the Tsaghkadzor Resort itself, with ski lift information, etc. 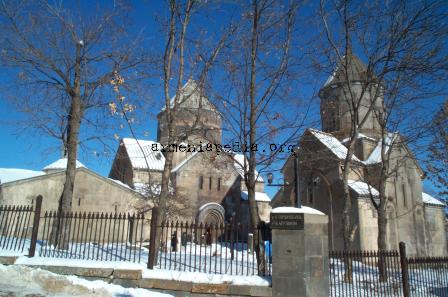 Turning left from the main square of Tsaghkadzor, the Writer’s Union guest house is among many options for those wanting to spend the night. Other hotels, B&Bs and cottages are also widely available, and reservations are a good idea during ski season. The road bearing right through town leads to Kecharis Monastery, founded early in the 11th c. by Grigor Magistros Pahlavuni (see Havuts Tar above), who built the S. Grigor church (the northernmost), and may also have built and occupied the smaller funerary chapel of S. Nshan (1051). When the Zakarians liberated the region, they gave the church to Prince Vasak Khaghbakian, father of Prosh, who sponsored the Katoghike church and (probably) the gavit of S. Grigor. Architect of the Katoghike was Vetsik, who left a khachkar inscribed, “Remember in your prayers the servant of God, the stonecutter Vetsik, who built this new church and, with its completion, completed his own life as well.” About 100 meters beyond the monastery is the smaller funerary church of S. Harutyun (the Resurrection) from 1220, sitting in a medieval cemetery. Close to the monastery is the House Museum of the Orbeli brothers, distant descendants of the Orbelian princely family and distinguished scholars: Levon (1882-1958) was a famous physiologist and member of the Soviet Academy of Sciences; his younger brother Hovsep (1887-1961) was Russia’s leading Orientalist and director of the Hermitage Museum in Leningrad; Ruben the eldest (1880-1943) was the father of underwater archaeology in the USSR. Only one was born in Tsaghkadzor, but all spent childhood years here when their father worked here in the Czar’s service.

At the monastery, the left fork goes to the Armenian Olympic training facility, the right fork to the ski slope. The lower chair lift runs all year, creaky but charming (500 dram), with excellent views of the forests surrounding. Skiing is indeed possible -- small entrepreneurs in the parking area rent out skis and boots, on a one-size-fits-all basis. The Writers Union House also rents out skis and boots of all sizes and in good condition. If you are spending a couple days here, hike a little over a kilometer SE over the ridge to the village of Makravan, mentioned in this chapter, with a nice monastery as well.