From armeniapedia.org
(Redirected from Sumgait Pogram)
Jump to: navigation, search 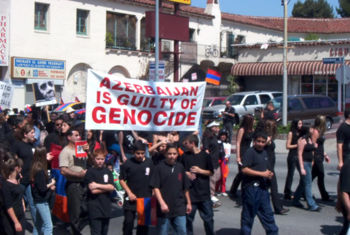 The Sumgait Pogrom was the Azeri-led pogrom that targeted the Armenian population living in the Azerbaijani seaside town of Sumgait (Azeri: Sumqayıt) in February 1988. On February 27, 1988, large mobs made up of Azeris formed into groups that went on to attack and kill Armenians in both on the streets and in their apartments; widespread looting and a general lack of concern from police officers allowed the situation to worsen. The violent acts in Sumgait were unprecedented in scope in the Soviet Union and attracted a great deal of attention from the media in the West. The massacre came in light of the Nagorno-Karabakh movement that was gaining traction in the neighboring Armenia SSR. The official death toll released by the Procurator General (tallies were compiled based on lists of named victims) was 32 people (26 Armenians and 6 Azeris). Many insist that at least 200, not 30, people were killed. [1]

On February 28, a small contingent of relatively unarmed Soviet MVD troops entered the city and unsuccessfully attempted to quell the rioting. The situation was finally defused when more professional military units entered with tanks and other armored vehicles one day later. The forces sent by the government imposed a state of martial law in Sumgait, established a curfew, and brought the crisis to an end.

The event was remarked with astonishment in both Armenia and the rest of the Soviet Union since ethnic feuds in the country were largely suppressed and officially nonexistent. Policies such as internationalism and Soviet patriotism were constantly promoted in the republics to avert such conflicts. Foreign analysts on the Soviet Union would also go on to presciently predict that the massacre, together with the Nagorno-Karabakh problem, would present a major challenge to the reforms being implemented by then General Secretary of the Soviet Union, Mikhail Gorbachev. Gorbachev was criticized to what was perceived as his slow reaction to the crisis and numerous conspiracy theories rose after the event. 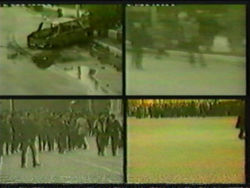 The February 1988 constitutional appeal of Karabakhs Armenian parliament to the Soviet leadership to transfer their region under the jurisdiction of the Armenian SSR was answered by Azerbaijan with riots and pogroms directed against the substantial ethnic Armenian population living in Azerbaijan's cities of Sumgait (pop. 250,000, about 18,000 of which were Armenian) and Kirovabad in 1988-89, and, later, in Baku, in 1990.

Marauding bands of Azeris, armed with makeshift weapons, ransacked Armenian homes, beating and killing the residents under the direct supervision and direction of the municipal authorities of Sumgait. It was a drawn-out, low-tech butchery, much of it perpetrated with knives and iron rods, and the killers often interrupted their work to rape and torture their victims.

The February 1988 massacre of Armenians in Sumgait was the first episode of mass ethnic violence in the Soviet history. These attacks targeting Armenians in Azerbaijan displaced over 370,000 people — approximately 80% of all Armenians residing in Soviet Azerbaijan.

The official figures show 32 dead (26 Armenians and 6 Azeris) for the three days, 27-29 February. Many Armenians do not believe the Soviet governement figure.

Marina Pogosyan, a young survivor of the Sumgait massacre, testified:

"On the twenty-sixth, a Friday, a friend of mine warned me to stay inside over the weekend. Still, I went to work - I taught in a nursery school - and walked home at noon. That afternoon, there was another Azerbaijani rally, in downtown Sumgait, and then crowds of people went through the shopping area where Armenians worked, and broke windows and smashed things. I heard cries of 'Death to Armenians! Blood for blood!' It was mostly young people, and the police didn't stop thepn. Late that night, after we had gone to bed, we heard yelling on the street, and through the window I saw thousands of people in a mob marching through the street, most dressed in black, carrying clubs and Turkish flags with the half-moon. They were yelling, 'Get out! Armenians are killing our people and you're sitting here! We must purge our city! The next day, we went to a neighbor's in the building for. her birthday party. We talked about what we had seen, but we thought it was just young hooligans, fhen a neighbor boy came in, looking pale. We asked him what was happening, and he said: 'You don't know? They're killing and burning people out there, breaking into people's apartments.' We called the police, and they said: 'Stay where you are. You're not the only ones. We can't help you.' A Russian neighbor came to us and invited us to wait in her apartment. There were about three families with her - fifteen people. We spent the whole night there. The mob came and knocked on our door, and she went outside and told them that we were not there - that we'd moved a week ago. A few times after that, they passed by and broke into neighbors' apartments. By that time, no Armenians were home. So there were no killings (in her building-ed.), but there was a lot of destruction. They threw the chairs and the dishes out of the window. I had absolutely no hope that we'd survive. I figured they'd kill us all sooner or later. The mob came again, but on Monday soldiers came in tanks and took us to the Party committee building."

Marina Pogosyan and her family were allowed to collect money and a few possessions before being flown to Yerevan. Most of Sumgait's Armenian community survived the attacks. Many, like Miss Pogosyan, were sheltered by brave Russian and Azeri-Turk neighbours. But the fate of those who fell into the hands of the mob was cruel. Lola Avakyan, a 37-year-old Armenian resident of Sumgait was one of the unfortunate. Seized by an Azeri-Turk crowd, she was stripped and forced to dance before having her breasts slashed and body burned with cigarettes. She was raped and then killed. Several AzeriTurks were arrested and convicted for their involvement in the mayhem.

Massacres of Armenians in Sumgait (a city located a half an hour drive away from the Azerbaijani capital, Baku) took place in broad daylight, witnessed by numerous gapers and passers by. The peak of the atrocities committed by Azeri perpetrators occurred on 27–29 February 1988. The events were preceded by a wave of anti-Armenian statements and rallies that swept over Azerbaijan in February 1988.

Izvestia Daily (20 August 1988) quotes Soviet deputy chief prosecutor Katusev who said that almost the entire area of Sumgait, a city with population of 250,000 had become the site of unhindered mass pogroms. The perpetrators who broke into Armenian homes were aided by prepared lists containing the names of the residents. They were armed with iron rods, stones, axes, knives, bottles and canisters full of benzene. According to witnesses, some apartments were raided by groups of 50 to 80 persons. Similar crowds (up to 100 people) stormed the streets.

There were dozens of casualties and 53 murders – most of those burnt alive after being assaulted and tortured. Hundreds of innocent people were wounded and disabled. Many women, including adolescent girls, were raped. Over 200 apartments were raided, dozens of cars burnt, numerous shops and workshops looted. Mobs hurled furniture, refrigerators, TV sets, beds from balconies and then burnt them. The direct and indirect result of these horrors were tens of thousands of refugees.

These were the human losses. Politically, it was most horrifying and teling that neiher police nor emergency aid workers interfered. Witness S. Guliev described the events: “The police left the city at the mercy of the mob. They were nowhere to be seen. I did not see any police around.” In court, witness Arsen Arakelian told about the malice of ambulance doctors who neither came to help his mother, suffering from a concussion, broken bones, loss of blood and burns, nor did they let him bring her inside the hospital.

The army arrived in Sumgait on 29 February. However, it limited itself to shielding against the ravaging mob that threw stones at the soldiers and did little to protect Armenians. “We are not instructed to go inside,” was the soldiers’ answer to the victims’ pleas for help, according to witness S. Guliev.

A Russian resident of Sumgait reported hearing repeated statements by Azerbaijanis such as: "The Turks had it right, they killed them all."[2]