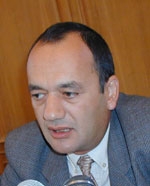 Mr. Zakharyan graduated from the Khachatour Abovyan Yerevan Pedagogical Institute in 1978. He is a stage manager, prose writer, playwright and publicist. He is also a member of the Armenia Writers' Union.

1999-2003 was his first term as a deputy in the NA (from the proportional list of the Unity alliance), where he served on the NA Standing Committee on State and Legal Affairs. He was first a member of the Unity Faction and later the People's Voice Deputy Group.

Mr. Zakaryan is married and has four children.