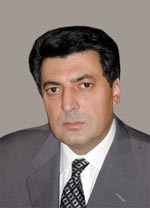 Stepan Demirchyan was born on June 7, 1959 in Yerevan.

Mr. Demirchyan received his degree from Yerevan Polytechnic Institute in 1981. He is an engineer-electrician and Technical Sciences PhD.

From 1981-1986 he worked first as a skilled worker and later senior skilled work­er, supervisor-probationer, head of station and then deputy head of the assembly shop in the Electrical Engines Industrial Complex under the Ministry of Electrical Technologies Industry. From 1984-1986 he worked as an assistant engineer in the Electrical Engines Industrial Complex. From 1986-1988 he worked first as a chief engi­neer and later as acting director in the Construction Plant of Programming Equipment under the USSR Ministry of Equipment, Automation Means and Management Systems. The next fifteen years were spent as the general director of the Mars Industrial Complex.

He was a candidate in the 2003 presidential elections.

On May 25, 2003 he was elected to the NA from the proportional list of the Justice Alliance and is the leader of the Justice Faction and the Armenia People's Party.

Mr. Demirchyan is married and has three children.