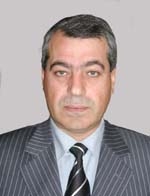 Mr. Ayvazyan received his degree in economics from the Yerevan Institute of National Economy in 1980.

1980-1982 he served in the Soviet Army. From 1982-1988 he worked as an econ­omist in various companies of the RA. In 1991 he was appointed prosecutor in the Shahoumyan region of the Republic of Mountainous Karabagh. In 1992 he worked as a first commandant in Kashatagh, an emergency commandant in the RA region of Karmir, a member of the operations staff and coordinator of military affairs in the Sevan basin, and headed the Tigran Mets militia organization. From 1994-1998 he was the director of the Sapphire factory. In 1998 he headed the Tax Inspectorate of Armenia and from 1999-2000 he was the Minister of Public Procurement.

1995-1999 was his first term as a deputy in the NA (electoral district # 89) where he was a member of the Republic Faction and the Yerkrapah Deputy Group, which he later headed.

On May 25, 2003 he was elected as a deputy to the NA from the electoral district # 10 and is a member of the RA Standing Committee on State and Legal Affairs. He is not a member of any factions or deputy groups.He is a member of the political board of the Republic Party.

Mr. Ayvazyan is married and has three children.