From armeniapedia.org
(Redirected from Samvel Alexanian)
Jump to: navigation, search

Widely known as "Lfik Samo". The nickname "Lfik" comes from the Russian word for bra, as Samvel's father had a bra shop in Soviet times. Enjoys a highly lucrative monopoly on imports of sugar, wheat and cooking oil to Armenia. 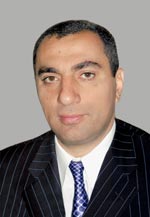 Mr. Alexanyan received his degree in economics from the Armenia Agricultural Academy. He was awarded a medal for his services in promoting the Olympic movement in the RA in 2002.

From 1988-1990 he served in the Soviet Army. In 1990 worked as a skilled worker in a factory producing sanitation technologies. In 1993 he was head of a production unit of metal constructions. For the past decade he has had his own business.

On May 25, 2003 he was elected as a deputy to the NA from electoral district # 14 and serves on the NA Standing Committee on Financial-Credit, Budgetary and Economic Affairs. He is not involved in any faction and has no political party affilia­tion.

Mr. Alexanyan is married and has five children.

Another millionaire "loss-maker" is Samvel Aleksanian, whose Fleetfood company enjoys a de facto monopoly on the highly lucrative imports of wheat, sugar, alcohol, and cooking oil to Armenia. The company posted zero profits in the first quarter. Armenian importers of fuel, which run a cartel-type business, were more generous in that regard, each of them diverting between $14,000 and $140,000 of their earnings to the state budget. And yet they may well be more profitable than a copper mining enterprise that was declared Armenia's number one corporate taxpayer after paying a $3.4 million first-quarter profit tax.

Both Aleksanian and the fuel importers are thought to be operating under the tutelage of Kocharian's most powerful associate, Defense Minister Serge Sargsyan. The volume of their commodity imports shown in the official statistics has long caused suspicion. Many in Armenia wonder, for example, why fuel imports to the country have remained largely flat in recent years despite a substantial increase in the number of cars.

Armenian authorities and retailers gave on Tuesday conflicting explanations of mysterious shortages of sugar in the country that cast fresh spotlight on the lucrative monopoly on imports of this and other foodstuffs enjoyed by a government-connected tycoon.

Sugar was not available for sale in most grocery stores in Yerevan. Supermarkets owned by Samvel Aleksanian, a businessman close to the government, were apparently the only places where city residents could buy it at a reasonable price. Long lines of people could be seen outside them throughout the day.

The crisis erupted on Saturday as the retail price of sugar suddenly skyrocketed from an average of 230 drams ($0.7) per kilogram. Some stores were selling it for as much as 600 drams per kilogram on Monday evening.

The Armenian government’s anti-trust body, State Commission on the Protection of Economic Competition on Tuesday blamed the “artificial shortage” on retailers, saying that they deliberately cut sugar supply to make “super profits.” ” “We know that some shops have stored sugar that was not put up for sale yesterday so that they can sell it for 600 drams,” said the commission chairman, Ashot Shahnazarian.

However, retailers interviewed by RFE/RL rejected the accusations, laying the blame on Aleksanian’s Salex Group company that single-handedly controls wholesale sugar imports to Armenia. “He probably wants to boost his supermarkets’ rating by not supplying others,” said one grocery store manager, who asked not to be identified. “He is probably trying to show that he is the boss in the republic and can easily hurt other people.”

“There is simply no sugar in the market right now,” added the manager. “We just can’t buy it from our [wholesale] supplier.”

But Shahnazarian insisted that Aleksanian and his company are not responsible for the unprecedented crisis. He argued that Aleksanian’s supermarkets did not raise the sugar price to cash in on the shortages.

Aleksanian, better known to most Armenians as Lfik Samo, is one of the country’s wealthiest entrepreneurs who holds sway in Yerevan’s blue-collar Malatia-Sebastia district. A parliament deputy affiliated with the governing Republican Party, he has close ties with President Robert Kocharian and Prime Minister Serzh Sarkisian. Those ties are believed to be the key factor behind his de facto monopoly on imports of sugar, flour, cooking oil, butter and other basic foodstuffs.

The sugar crisis began just days after a sharp increase in the retail price of cooking oil and butter. Shahnazarian’s commission found the price hike “artificial and unjustified” and fined Salex on Thursday.