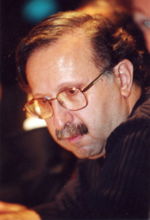 In addition to his reputation as a recitalist and chamber music partner, pianist ŞAHAN ARZRUNI (Շահան Արծրունի - Sha-HAN Ards-roo-NEE) has achieved recognition as a composer, ethnomusicologist, producer, teacher, lecturer, writer, recording artist and broadcasting personality. He has toured in these capacities throughout North and South America, Europe, the Middle East, the Far East and Australia. Arzruni has become a familiar figure through many television broadcasts, such as Johnny Carson and Mike Douglas Shows. He has been featured in a number of PBS specials--Around the World in ‘82, Gala of Stars, and A Place of Dreams: Carnegie Hall at 100--and has recorded for European radio networks, including the BBC. Mr. Arzruni has given command performances at the White House, as well as the British, Danish, Swedish and Icelandic courts.

Motivated by ethnic awareness in the United States, Arzruni continuously researches the musical roots of his Armenian heritage. He recorded a three-record anthology of Armenian piano music, and co-produced an eight-disc set of instrumental and vocal Armenian music. He also delivered papers and organized symposia for such institutions as Harvard University, Columbia University and University of Michigan at Ann Arbor. Şahan Arzruni is the author of scholarly books and a contributor of articles for academic journals; he has also written for various editions of The New Grove Dictionary and the Dictionary of the Middle Ages.

An artist of striking versatility, Şahan Arzruni has performed with Victor Borge, playing the role of straight man in the master’s hilarious musical programs. As a teenage writer, he authored a textbook of music in his native Istanbul. As a performer, he recorded many albums featuring twentieth-century works intended for pedagogic use. Arzruni also hosted a radio program on New York’s Municipal Broadcasting System for five years, addressing issues concerned with the didactics of piano playing. A Steinway artist, he was invited to perform on a 1869 Steinway piano at the Metropolitan Museum of Art for the inaugural of the centennial celebrations of the Museum’s collection of historic instruments. Recently, Mr. Arzruni delivered a lecture on Armenian liturgical chants at the invitation of the U.S. Library of Congress, in Washington D.C. In 1996, he received from His Holiness Karekin I an encyclical and the Sts. Sahak and Mesrob Medallion. On the occasion of Aram Khachaturian’s Centennial in 2003, Sahan Arzruni was appointed the full-fledged representative of Armenia’s Ministry of Culture in the diaspora.