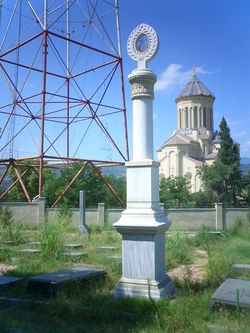 Raffi, the great novelist of Armenia, who was really the founder of the Armenian historical novel.

The author of The Fool (Khent') whose real name was Hagop Hagopian, is well known by his pseudonym, Raffi. He was an Armenian hailing from that part of Armenia which was under the Mohammedan rule of the Shah of Persia. He made his debut as a writer in Tiflis, away from his native land, joining the literary school of "Mishag", which was an Armenian journal founded by Krikor Arzrouni in l872. This publication under the wise leadership of its founder and editor, played a very striking role in kindling sparks of enlightenment and causing the awakening of the Armenian people from the deep lethargy in which the vast majority of the Armenians slumbered for centuries after they lost their political independence in 1393 A.D.

The editor of "Mishag" saw in the work of this bright young man the possibilities of a great writer and he encouraged him in his first faltering attempts at writing. Raffi, on his part, scrupulously attended the literary soirees given by the editor of "Mishag", and gradually attained refinement in his crude literary endeavors. He published in "Mishag" several short stories based upon his observation of the Armenians in Persia, Russia and the Caucasus. These were fine beginnings. Gradually his observations became keener, his literary style became more fluent, colorful, attractive and of fine quality, and his insight into the complicated mysteries of the life of the Armenian peasant especially became deeper, and his forecasts for the future became more prophetic.

In all his works he protested against injustices, great or small, he exposed human foibles, individual or collective, and scathingly assailed tyrannies, and fiendish atrocities, perpetrated by the Persians, Kurds and Turks. As a teacher in different localities, at different times, he had opportunities to study the life of the Armenians, and their educational conditions. Without reserve, he ridiculed the tradition bound teachers in the imaginary person of Der Totig, and he censured the frivolities and laziness of the Armenian students attending the Russian Universities. On the other hand, he had words of commendation for the purposefulness and seriousness of the famous group of Armenian students of Germany. Some of these students became the champions of the movement for reawakening Armenian culture in Russia and the Caucasus.

Raffi himself was the protégé of one of these products of German education, Krikor Arzrouni, the editor of "Mishag". Having been steeped in the ideals of this intellectual nobility Raffi himself used the novels as an instrument of propagating these ideals of intellectual and political regeneration, and whipped public opinion into more promising and creative forms.

The novel for Raffi was not merely a literary genre the purpose of which was entertainment, but it was the most effective means of gaining the attention and interest of a vast multitude of readers imbuing them with his cherished ideals and dreams of a perfect society.

"The Fool" is one of these novels in which the author has a thesis to expound and a sermon to preach. The theme of the story is taken from the bloody events which followed as the aftermath of the war of 1877 between Turkey and Russia. Raffi in his travels had witnessed the deplorable conditions to which the Armenian people were subjected. These were chiefly peace loving peasants whose sole purpose in life was to till the soil and to produce good harvests in peaceful enjoyment of their quiet and serene life. He had witnessed how these industrious and extremely docile villagers were oppressed and subjected to all kinds of inequities on the part of the Turkish officials. He had observed with indignation how these innocent people were menaced continuously by the rapes, plunder and criminal attacks of the hordes of Kurdish bands, whose blood thirsty instincts were sharpened to a keener edge by the heated pressures brought upon them by the officials of the Sultans of Constantinople. In spite of the fact that their living conditions were unbearable, the Armenian peasants did not utter a word in protest, having been trained in docility by the clergy for centuries with the Biblical exhortation: "If they smite thee on the one cheek, turn the other also to them."

Raffi having seen the Armenian refugees who had escaped certain death at the hands of their pursuing enemies, the Turkish soldiers, in the province of Alashgerd during the Russo-Turkish War of 1877, set his imagination into motion and gave us a novel of great merit, weaving a succession of captivating episodes, gruesome events, and portraying the fascinating pictures of the Armenian peasant, first in the enjoyment of his life in the confines of his serene home and then his wanderings away from his home, tortured in the clutches of famine, pestilence and unscrupulous people. This is a captivating story, which was read avidly by people of his time and which is read with the same consuming interest at the present moment by people who are remote in time and space from the scenes of events depicted in this novel.

Raffi has one obsession, which comes to the surface, time and time again, namely, he finds himself unable to comprehend how human beings can be so peace loving, so docile and servile that they will not dare lift a finger in protest against the perpetrator of atrocities which transcend human imagination by their extreme brutality. Referring to the scene of slaughter at Bayazid, Raffi puts in the mouth of the imaginary hero, Vartan, these words: "Look, look! In all the city you do not find a man who raises his hand against his slayer. What more can be done to a man to move him to passionate resistance? They have burned his house before his eyes; they have roasted his children; they have dragged away his wife and daughters; the man has seen all this yet he humbly bows his head to receive the stroke of the sword!" ---Again, Vartan makes this trenchant remark: "this people do not know how to die with honor."

The thesis of Raffi is that his people should be taught to defend their honor, their wealth and their lives, he longs to restore in the hearts of the docile Armenian peasants the heroic spirit of the Armenian national hero, Vartan, who won for the Armenians in the fifth century A.D. freedom of conscience by fighting with his small band of heroes against the multitudinous hordes of the Persian Zoroastrian fanatics.

Leaving to the reader the unique enjoyment of reading the fascinating and intriguing events related in the novel, let us turn now to a brief analysis of the artistic texture and structure of the novel.

Raffi was a writer endowed with a vivid imagination, keen observation and unbounded idealism. His novel is a mixture embodying all these qualities. He is almost incomparable in the portrayal of types and delineation of characters. Some of his depicted personages are real and charming, such as old man Khacho, the head of the village who represents the practical wisdom, the admirable industry, the harmonious and virtuous life prevailing in the peasant home. Khacho's household is a beautiful picture, inspiring at times, artistically portrayed by this great novelist, who excelled in the art of depicting domestic scenes. One loves to look at this painting of the simple life of the Armenian peasant with its serenity,, quietude, its industry, its harmony and cooperative spirit. Another real character is Thomas Effendi, an Armenian who is employed by the Turkish authorities as the tax collector of the district. In him you will find everything that is corrupt, everything that is base, ignoble and unlovely. Der Marook, the village priest, in whom one sees the decadence of the splendid spirit of devotion and self-abnegation of the Armenian clergy of the bygone ages. In passing, I must point out that Raffi betrays, throughout the novel, a little exaggerated anti-clerical spirit, so prevalent in his time, and perhaps justified. In this novel one finds oneself face to face, in the panorama of kaleidoscopic events, with the picture of the cruel and wily Kurdish chieftain, the rapacious and salacious Fattah Bey. In contrast with these, one also comes across the portraits of some unreal characters, the heroes of the story, created by the fertile imagination of the author. Vartan is the chief hero, who is in love with the comely daughter of this good man Khacho yet he is more in love with his ideal, namely an intense yearning to save his people from the shackles of slavery, ignorance, and turpitude. We meet other secondary heroes also, the inexperienced Tiutiukjian, the apostle of new ideas and ideals, and Melik-Mansoor, the astute and capable agent of this new imaginary state of affairs, which is beautifully depicted in the final chapter of the book, the dream of Vartan. The epitome of the entire philosophy of the author is condensed in this dream which Vartan sees at the tomb of his fiancee. He dreams that the peasant has been emancipated from the chains of tyranny. Everyone enjoys genuine freedom from fear and poverty. He dreams that the ideal of the inalienable rights of the individual for the pursuit of happiness has been realized and people live at last in peace side by side.

The excellent qualities of the novelist lie chiefly in his superior style of writing, which is lucid as the limpid waters of a mountain spring, colored with fascinating metaphors; a style pulsating with life, imagination, poetic rhythm, vividness, and warmth. If R. Apovian was the founder of the novel for the Eastern Armenians, with pioneering efforts, and crudities of his newly introduced (vulgar) vernacular language, Raffi was the founder of the Armenian novel, with a perfection of style, with an intriguing structure.

We must not forget that everything is not perfect in Raffi's works. He is weak at times, especially in the denouement of events and development of his characters. His delineation of characters and types is fascinating yet some are unnatural and artificial. However it may be, all his novels, and we have a host of them, are extremely interesting and captivating. They are readable and they have powerfully influenced all Armenians of succeeding generations, not only the common people but also intellectuals and writers as well.