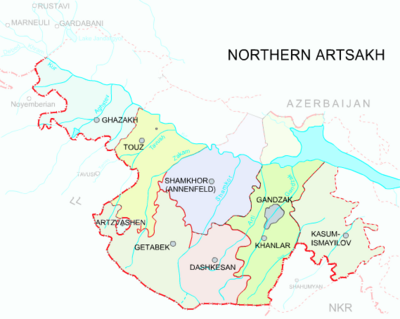 Northern Artsakh (Armenian: Հյուսիսային Արցախ, Russian: Северный Арцах, Azeri:Şimali Arsak) - is a conventional name used with reference to the territory lying in the area between the watershed divisions of Sevan and Mrav and the river Kur. During the early medieval period, Northern Artsakh (it was more known under the name of Gardman in the Middle Ages) included some of the districts of Utik and Artsakh Provinces of Great Armenia, such as Koght, Kust-i-Parnes, Gardman, Shakashen, etc. During the late medieval period, it formed part of Gandzak (Gyanja) Khanate, being later incorporated into the territory of Russia, after which it became known under the name of Yelizavetpol Province. After the Soviet takeover, the region was annexed to the Republic of Azerbaijan, being divided into the following administrative units: Getabek, Dashkesan, Touz, Khanlar, Kasum-Ismayilov (Gyoran), Ghazakh, Shamkhor and Shahumian. This last one, forming part of the present-day Republic of Nagorno Karabakh, is among the territories now occupied by Azerbaijan.

In Northern Artsakh are located the catchment basins of the rivers Asrik, Zakam, Shamkor, Artinajur (Koshkar), Gandzak, Kurak and Sevjur, which take their sources in the mountain chains of Sevan and Mrav, and merge into the Kur on the right. It also embraces the downstream reaches of the rivers Joghas, Aghstev and Tavush.

August Haxthausen (1792 to 1866), an ethnographer and an official from Prussia who visited Gandzak in the 50s of the 19th century, writes, "Gandzak District is inhabited by the Armenians and the Tartars, the former dwelling in the mountains and the latter in the fertile plains. The Armenians are mainly engaged in farming and gardening (they grow wheat, barley, millet, maize and flax), while the Tartars' main occupation is stock-breeding: the majority of the latter is lazy but rich, whereas the former, on the contrary, are very hard-working. The Turkish villages are rather large, unlike the Armenian ones that comprise a small number of houses..."

In 1904 the province had a population of 936,629._63 Over many centuries, the Armenians of Northern Artsakh were mainly concentrated in the mostly wooded foothills of the region, out of security considerations. Thus, at the period between the 19th century and the deportation of 1988, the aforementioned areas had over 50 Armenian villages.

The available statistical data regarding the Armenian population of Gandzak District as of the second half of the 19th century represent the following picture:

On the eve of the deportation of 1988, the Armenian inhabitants of the urban and rural settlements of Northern Artsakh totaled 70,000.