From armeniapedia.org
(Redirected from Noratus Village)
Jump to: navigation, search 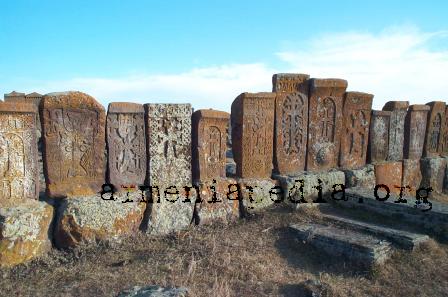 Exiting E at a somewhat over-engineered cloverleaf intersection leads one toward Lake Sevan and the ancient village of Noratus* or Noraduz (5465 p). Turning right at the first street past the bridge leads to the S edge of town and S. Grigor Lusavorich church/Daputs Monastery of the 9-10th c., rebuilt by the 11th c architect Khachatur. Continuing straight into the center of village, the second left leads to the ruined S. Astvatsatsin church, a basilica built by Prince Sahak at the end of the 9th c., probably on earlier foundations. Outside the W door are intriguing carved grave monuments. On the E edge of town is a huge medieval-modern cemetery with an impressive array of early khachkars* =70= (40 22.40n x 045 11.05e), the largest such collection of khachkars in Armenia, as well as evocative modern funerary statuary. Continuing up the bare, windswept hillside beyond, there is a smaller cluster of khachkars around a medieval funeral chapel. Two km E of Noratus on the top of a hill is the Heghi Dar cyclopean fortress with a large tomb and two big inhabited caves. On a promontory N of Noratus is a large, well-maintained forest of antenna masts, ostensibly belonging to Armentel. A couple of km S of Noradus, near the former village of Artsvakar (formerly Ghshlakh, now a suburb of Gavar), are the Early Iron Age cyclopean fortresses of Ghslakh (near the lake), Zhami Dar (just W of Artsvakar) and Mrtbi Dzor (S of Zhami Dar).