From armeniapedia.org
(Redirected from Montevideo)
Jump to: navigation, search 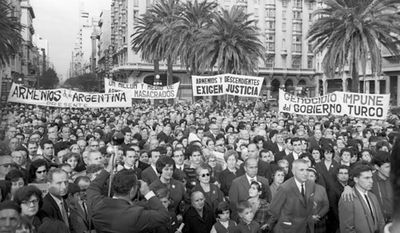 The Republic of Armenia Square was inaugurated on January 7 in Punta del Este, Uruguay, with a sculpture of an Armenian woman made by Gor Davtyan, an artist from Ijevan, that was donated in gratitude for naming the public space.

The project was developed jointly between the Embassy of Armenia and the Municipality of Maldonado, following a resolution passed in December 2015, Prensa Armenia reported.

The ceremony was attended by the Mayor of Maldonado Enrique Andres Antia Behrens, the Mayor of Punta del Este Andres Jafif, and the Minister of Tourism of Uruguay, Liliam Kechichian, along with the Ambassador of Armenia in Argentina, Uruguay, Chile and Peru, Esther Mkrtumyan, the Archbishop Primate of the Armenian Apostolic Church in Uruguay, Monsignor Hagop Kelendjian and representatives of the Armenian National Committee of Uruguay.

"The Armenian community has a lot of teamwork and a lot of people,” said Andres Jafif. "We have been working for many years for this place that I think our community deserves, in a beautiful place like Punta del Este. Our community has won the affection of all Uruguayans, a strong, hardworking community that continues to maintain its traditions,” added Liliam Kechichian.

The action is a sign of friendship that takes place within the framework of the 25th anniversary of the establishment of Diplomatic Relations between the Eastern Republic of Uruguay and the Republic of Armenia, and the centennial of the Armenian diaspora in Uruguay. In addition, during the event Punta del Este and Ijevan were declared sister cities.

Ambassador Esther Mkrtumyan recalled that “25 years ago with the establishment of diplomatic relations between Uruguay and Armenia, the traditional affection between our people turned into friendship and bilateral cooperation, in close cooperation for peace and harmony among nations.”

MONTEVIDEO — On April 7, a ceremony was held at the Reception hall of the Ministry of Foreign Affairs of Uruguay, on the occasion of the release of stamp dedicated to the 100th anniversary of the Armenian Genocide.

In their remarks, Post Office president Solange Moreira, Minister of tourism and sport Lilian Keshishian, the Primate of the Uruguay Diocese of the Armenian Apostolic Church, Archbishop Hagob Kelendjian stressed the role of the Oriental Republic of Uruguay in the process of international recognition and condemnation of the Armenian Genocide, commended and expressed gratitude for the stamp redemption by Uruguay dedicated to the memory of victims of the Armenian Genocide.

In his remarks, Rodolfo Nin Novoa commended the role and significance of the Armenian community in political and public life of Uruguay.

Foreign Minister of Uruguay touched upon bilateral Armenian-Uruguayan relations, high-level visits paid, signed agreements. In this context, Rodolfo Nin Novoa stressed significance of the agreement on liberalization of visa regime between two states, as well as potential in economic, social, trade, cultural and political spheres; and importance of development and strengthening of cooperation.

Foreign Minister of Uruguay concluded with following words, “This stamp is abundant in its essence and sense, as it pays tribute to all the victims of the heinous crime of Genocide, which we disdain and condemn.”

YEREVAN (Yerkir)--Members of Uruguay's Armenian community demonstrated outside the European Union (EU) mission in Montevideo, to protest the start of membership talks with Turkey, and to demand the latter recognize its genocide of Armenians before being granted membership into the Union.

A delegation handed an EU representative a petition signed by 30,000 people, demanding the EU deny Turkey membership, unless the country recognizes the Armenian genocide.

YEREVAN, OCTOBER 26, NOYAN TAPAN - ARMENIANS TODAY. The House of Representatives of Uruguay's parliament issued on October 26 a statement regarding the Armenian-Turkish relations.

"Taking into consideration this parliament's contribution to the process of recognition of the Armenian Genocide and especially its wish to assist the reconciliation of the Armenian and Turkish peoples, the House of Representatives of Yruguay's legislative body joins the call of the US and the European Union and requests that Turkey lift the blockade imposed on Armenia and establish diplomatic relations between the two countries," the statement, which was unanimously adopted by 70 deputies at a plenary sitting of parliament, in particular reads.

According to Radio Armneia (Yruguay), Lilian Keshishian, the first female deputy of Armenian descent in the country's parliament, who took quite an active part in the process, was satisfied with the above mentioned statement.

Lilian Keshishian will arrive in Yerevan next week to participate in a festive event in celebration of the 15th anniversary of Armenia's National Assembly.

To recap, recently Turkey proposed, through its ambassador, that Yruguay's parliament sponsor and take an immediate part in the activities of a commission composed of international experts to decide whether there was a genocide of the Armenians in 1915 or not. At first Yruguayan legislators accepted the Turkish diplomat's proposal without going into the heart of the matter.

However, upon being informed about it, the Armenian ambassador Ara Aivazian asked to hold a meeting at parliament to present Armenia's point of view. In fact, there was a danger that the country that was the first to recognize the Armenian Genocide might despute the very fact of this genocide. Yet it did not happen, and Yruguayan parliament adopted a statement in favor of Armenia.