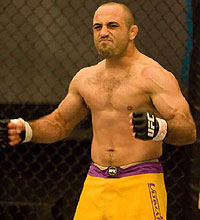 Manny Gamburyan (born May 8, 1981) is a mixed martial artist with a background in judo. Manvel was chosen as a participant on the reality show The Ultimate Fighter 5. He fights on Jens Pulver's team. Manny defeated Noah Thomas in the preliminary round. In his next matchup Gamburyan defeated heavily favored Matt Wiman to advance to the semifinal round.

In May, 1991, Manvel's family relocated from Armenia to United States. A while after his arrival, Manny began training in judo at Gokor Chivichyan's Hayastan MMA Academy and quickly became one of the top judokas in the country, winning junior nationals less than two years later. He went on to win junior nationals eight times, the junior Olympics once, and was a member of the 2000 judo junior world team.

The cousin of UFC fighter Karo Parisyan, Manvel was dubbed "Pitbull" for the tenacity he displayed in fighting lightweight champion Sean Sherk in 2001. On June 18th, 2007, in an radio interview with Kevin and Bean on KROQ, Manny said his nickname was changed to "Anvil", since "Pitbull" was already taken by other UFC fighters.

In the semifinal round, Manny once again beat the odds by beating Joe Lauzon in a unanimous decision and advancing to the final where he faced Nathan Diaz. He lost to Diaz in the second round after dislocating his right shoulder and, subsequently, tapping out.

For his fight with Nate Diaz in the Ultimate Finale Manny walked out to his fellow Armenians', System of a Down, song "Toxicity".

He doesn't have the chiseled physique of some of the other competitors. Gamburyan, generously listed at 5-foot-5 on the UFC's Web site, was the shortest of the 16 fighters competing for a six-figure contract with the UFC.

But what he lacked in size he made up for with a relentless and aggressive style that he used to overwhelm his three opponents en route to the finals.

"I was the shortest one, the littlest one, but big things come in small packages. Always remember that," Gamburyan said.

Even UFC president Dana White counted out Gamburyan on two occasions during the series before Gamburyan won him over with his victory over Joe Lauzon in the semifinals.

"Manny is 10 times the fighter I thought he was," White said after Gamburyan's unanimous decision over Lauzon.

Gamburyan takes on Nate Diaz, the younger brother of UFC and PRIDE veteran Nick Diaz, in the lightweight finals on "The Ultimate Fighter 5" finale Saturday at 9 p.m. at The Palms Resort Casino in Las Vegas (Spike TV).

Gamburyan said many overlooked him. He had been out for two years because of a series of injuries before entering The Ultimate Fighter House. But Gamburyan, a cousin of UFC veteran Karo Parisyan, had impressive Judo credentials, and his lone loss was a decision to current UFC lightweight champion Sean Sherk.

One of the toughest things about the competition, Gamburyan said, was being locked up in the house with 15 other fighters vying for the same contract. TV, girlfriends or anything else from the outside world were not permitted. He said he got some of the best training being on Jens Pulver's team, but he was happy to be rid of the cameras and out of the house.

Gamburyan and Diaz were teammates on Pulver's team and became friends. They got into a shouting match after Gamburyan's semifinal victory, but Gamburyan said that didn't hurt the friendship.

"Karo and Nate were arguing," Gamburyan said. "Karo was just joking around. Nate probably didn't think it was funny. I was friends with Nate throughout the whole show, so I have nothing against him."

Gamburyan and Diaz are familiar with each other's styles after the many hours they put in at the UFC's training center in Las Vegas.

"I've got to stay aggressive, stay on top, pound him and look for an opening," Gamburyan said. "I'm a good jiu-jitsu guy myself. I was rolling with him every single day. He's got good jiu-jitsu. I've got good jiu-jitsu. We went back and forth. It's going to be a crazy fight. That's for sure. I'm prepared for a war."

The two coaches, Pulver and B.J. Penn, meet in the main event of the TUF 5 finale. The proverbial bad blood has been brewing between Pulver and Penn since they first fought in 2002. They almost came to blows on a few occasions during the filming of the show. Gamburyan said the fight is too close to call, and he won't make a prediction.

"He (Penn) wants to win because he lost to him in everything," Gamburyan said. "He lost the coin toss, (a $10,000 game of) ping pong, Jens Pulver's fighters are in the finals, plus he lost the fight in 2002, so he really, really wants this fight."