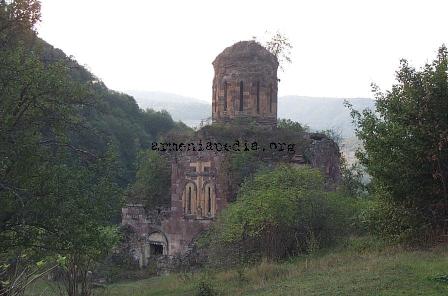 Khuchapi vank is situated in on the very northern border of Armenia, in a thick forest at the foot of Lalvar Mountain. There used to be a village near the temple with the same name. This massive monastery is something like the height of a 5 story building, with beatiful colored stones, and intricate carvings. The room to the right of the altar (when you face the altar) has a way to climb up then into the walls themselves where a circular stairwell will take you to the upper levels of the church, with incredible views. The easiest way to get to Khuchapi is getting to Khorakert Monastery first, and then making your way to Khuchapi. Otherwise, you can do the official border crossing north of Stepanavan and then cut across to the east a few kilometers.

The main church (XIII c) was situated on the southern side of the complex. It is fully preserved. The face-stones of walls - especially in northern side - have come off. Some separate parts are left from cornices and cover slabs. It is an east-west stretched rectangle domed hall, where the dome leans on the arches connecting the pair of octahedral pillars and the edges of the big bay. The big bay with deep stage is half-round in scheme, and has three rectangle and a round window in the eastern side. On its two sides there are two-storied vestibules. The church has three entries; the southern and western ones are bordered with a pair of half-pillars and the northern one, which is really narrow, finishes with pointed arch. The pillars have arches, the drum of the dome is twelve-hedral with upward order. All the pillars have narrow stretched windows bordered with arches. Animal motives are curved on the arches. The western side has a pair of triangle bays, which end with festons (Russian word). The cornice is covered with ornamental texture. The wall-arch of the church can be well seen from the praying hall. Crosses are placed in southern and eastern side windows.

The outward layer of the walls is built of dark reddish felzit; the inside walls as well as the pillars are from tuff and are plastered. The border-stones of the entries are yellow felzit. The church used to have 3-m wide vaulted halls in southern and northern sides, from which only the half-destroyed walls of the southern one preserved. The vestibule took the whole space from west, and only signs of it are left. Not far from it, in rather low place, there are half-trimmed stony walls left from tower-like two-storied constructions. 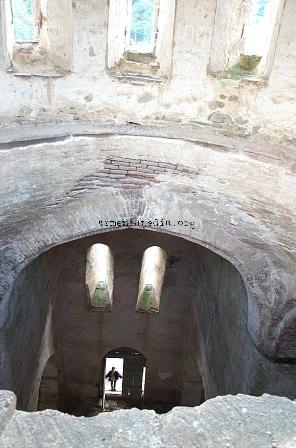 Khuchapi Monastery - interior from above

25 m towards north from the main church the vaulted, one-nave hall’s remainders are situated. The cover is fastened with vaulted arch, and the longitudinal walls are fastened with pillars. The eastern side finishes with a half-round bay stretching almost the whole length. It is built of small and big andezit stone and was plastered. In southern and northern sides much smaller vaulted halls were placed. As the arches and walls prompt, the small halls were built at the same time as the big one. They finish with rectangle vestibules in eastern half, the entries of which are from west. Another small one-nave hall used to stand not too far from the latter one and is considered to be the oldest construction of the complex.

Khuchapi vank stands out with its harmony with environs, processed stone and high quality of decorations. 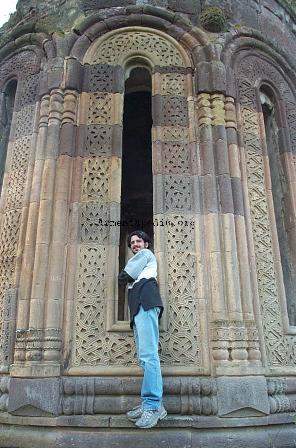 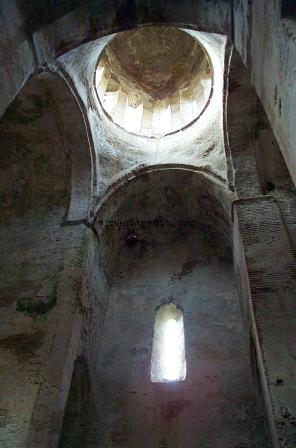