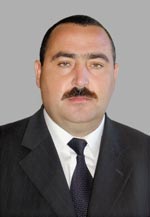 Hrant Grigoryan was born on November 23, 1966 in the village of Arshalouys in the Echmiadzin region.

Mr. Grigoryan received his degree in economics at the Echmiadzin Grigor Lousavorich University in 2000. He is an economist. He was awarded a Mayrakan Erakhtagitoutyun (Mother's Gratitude) Order in 1995, 2nd Rank Martakan Khach (War Cross) Order in 1996, a Marshal Baghramyan medal (2001), an Andranik Ozanyan Medal (2003) and a Vazgen Sargsyan Medal (2003).

From 1983-1985 he worked in the collective farm of the village of Arshalouys. From 1985-1987 he served in the Soviet Army. From 1989-1996 he served as a combat­ant and later deputy of the unit commander of the Yerkrapah Detachment. In 1995 he served as a unit commander and head of the Echmiadzin regional division of the Yerkrapah Volunteer Union. From 1996-1997 he worked as a director of the Echmiadzin Bread Factory.

1999-2003 was his first term as a deputy in the NA (electoral district # 37), where he served on the NA Standing Committee on Defense, National Security and Internal Affairs. He was a member first the Unity Faction and later the Armenia Deputy Group.

On May 25, 2003 he was reelected to the NA from electoral district # 28, where he serves on the NA Standing Committee on Defense, National Security and Internal Affairs. He is a member of the Republican Party of Armenia Faction and he has no political party affiliation.

Mr. Grigoryan is married and has four children.