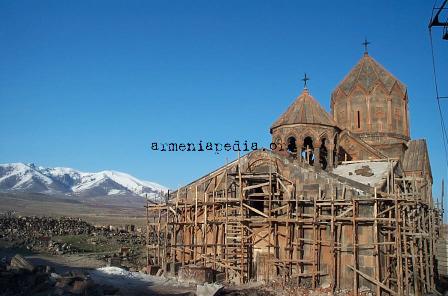 Hovhannavank Monastery with Mt. Ara behind

Ohanavan (1403 v) was resettled by migrants from Mush in 1828. Perched on the Kasagh gorge rim, Hovhannavank* is a major monument from the 7th c. and later, the best documented of the major Armenian monasteries due to a manuscript of pious history compiled in 1686 by the Archdeacon Zakaria. The monastery was dedicated to John the Baptist, and has a 12th c. fortification wall with towers to the W, a 13th c. church and gavit (a rebuilding financed in part by Kurd Vachutian), and an early single-aisle church. The monastery has rich stone decoration, and many inscriptions. According to one high on the N wall of the so-called “tapanatun”, “By the grace of beneficent God, in the reign of Queen Tamara daughter of the great George, in the year 642 (AD 1200), of the race of Torgom, we the brothers Zakaria and Ivane, sons of Sargis the great, son of Avag Zakaria, when the light of God’s grace rose and entered Armenia and strengthened our weakness in the battle against the enemies of Christ’s cross and destroyed their power and quenched their violence and the country of Ararat was delivered from the heavy yoke of their servitude, we wished to make offering and gave the tribute of grace to the Holy Forerunner of Hovhannavank...”

The source of the text above is the Rediscovering Armenia Guidebook.