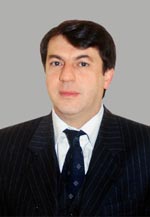 Mr. Pamboukyan graduated with a degree in economics from the Yerevan Institute of National Economy in 1986.

From 1979-1981 he worked in the Publishing Unit of Yerevan State University. From 1981-1983 he served in the Soviet Army. For the next nine years he was a worker and later became the acting director of the Zovouni Production Complex. From 1992­-1996 he headed different limited companies. From 1996-1999 he was the president of the board of Trustbank CJSC.

1999-2003 was his first term as a deputy of the NA (electoral district # 2) and he was on the NA Standing Committee on Financial-Credit, Budgetary and Economic Affairs. Initially he was not a member of any faction or deputy group, but later he became a member of the “People's Deputy” Deputy Group

On May 25, 2003 he was reelected to the NA from electoral district # 8 and he is currently on the NA Standing Committee on Financial-Credit, Budgetary and Economic Affairs. He is not a member of any faction or deputy group. He has no polit­ical party affiliation.

Mr.Pamboukyan is married and has two children.